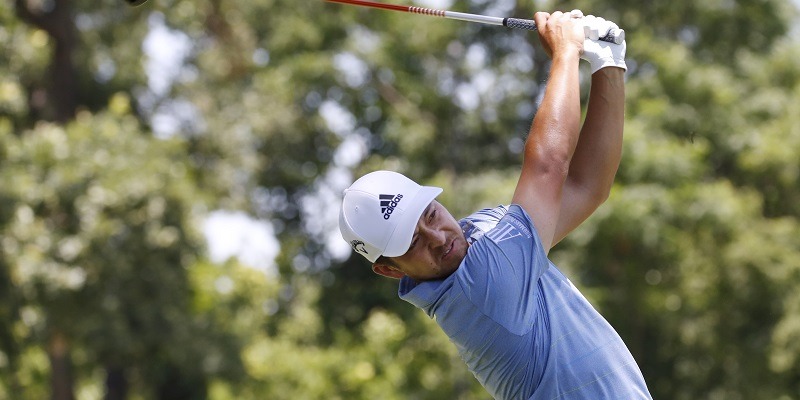 Xander Schauffele drained a 12-foot birdie putt at No. 18 on Saturday to shoot 4-under 66 and take a one-stroke edge atop a crowded leaderboard through three rounds of the Charles Schwab Challenge in Fort Worth, Texas.

Schauffele sits at 13-under 197 through 54 holes at Colonial Country Club, just ahead of the five-player cluster of Justin Thomas (who shot 66), Gary Woodland (66), Collin Morikawa (67), Jordan Spieth (68) and South Africa’s Branden Grace (66).

Another stroke back are Daniel Berger (67) and Harold Varner III, who entered with a one-stroke lead over Spieth and Bryson DeChambeau before shooting 70.

DeChambeau also shot 70 and is tied with five others at 10 under, including Rory McIlroy (69) and Patrick Reed, who fired a 63 to tie the low round of the tournament thus far. Reed, who started the day eight strokes off the lead at 3 under, teed off more than three hours before the final pairing hit the course.

“You look at the names on the leaderboard, it’s sort of what I expected,” Schauffele told reporters afterward. “Just everyone coming out of quarantine wanted to play, and I think the next three weeks that will really show.”

The tournament is the PGA Tour’s first since a two-month hiatus prompted by the coronavirus pandemic. No fans are in attendance at Colonial.

Schauffele made the turn at 1 under on the day before making his move with back-to-back pin-seeking approach shots. He left his 160-yard approach at the par-4 10th inside of a foot, then dropped a 102-yard wedge to two feet at the par-5 11th for another tap-in birdie.

Schauffele also birdied the 15th before a bogey at 16 and the closing birdie. It was his second straight round of 66 after a 65 on Thursday.

“I played solid,” he said. “It was quiet, as always, or at least for the last couple days, and it was fast. We played in twosomes, and it was a good day. You know, I tried to stay as cool as possible, hang out in the shade, and take care of my business.”

Spieth held the lead for much of Saturday after collecting four birdies against one bogey on the front nine. But he went cold on the back, failing to make a birdie and missing a 10-footer for par at the 15th.

“I felt like I actually hit it better on the back than the front,” Spieth said, “but just didn’t make anything.”

Thomas, currently ranked fourth in the world, had a tap-in birdie at 17. It was the last of four birdies on a bogey-free day.

“I salvaged a decent day out of it,” he said. “I felt like I got off to a good start in terms of ball-striking, gave myself some chances. … But no, in the middle of the round when I felt like I could have made some more birdies to try and get some momentum going, I was really salvaging to save par.”

Woodland closed with consecutive birdies to briefly hold a share of the lead. Morikawa made five birdies on the back nine, including a tap-in at the 16th and a four-foot putt at 17 to also share the lead for a time.

Grace recovered from a bogey at the 11th with three birdies down the stretch, including one at 17. He shot 66 for the third straight day.

Varner had a quiet day, managing a birdie at the first but none the rest of the way, and making his only bogey at No. 14.

Reed had two strings of three straight birdies and added another birdie at 18 to cap a bogey-free round.

McIlroy, the world’s top-ranked player, recovered from two bogeys late on the front nine with two birdies on the back.

“It’s what I needed to do today,” Reed told reporters after his round. “I think that was the biggest thing. Kind of coming into today, I just felt like I did a lot of things solid the first two days, but I just made too many careless mistakes, so I was trying to clean that up today, and I felt like I did a good job on that and just gave myself a chance with my putter.”

Reed, the 2018 Masters champion, is 10 under with 10 birdies and 14 pars over his last 24 holes. That followed up an inconsistent first 30 holes that saw Reed notch an eagle, seven birdies, six bogeys and a triple-bogey.

“I kind of dug myself a hole yesterday morning, got myself outside that cut line, and it’s just never a good taste missing a cut, especially after having three months off to kind of come into this week,” Reed said. “I knew I had put in the work, I just needed to get something going.

“Something kind of clicked yesterday in the swing that kind of allowed me to hit it a little closer and make some putts, and I just kind of ran with it today. I felt like I had a good warmup and because of that I was able to get off to a hot start.”