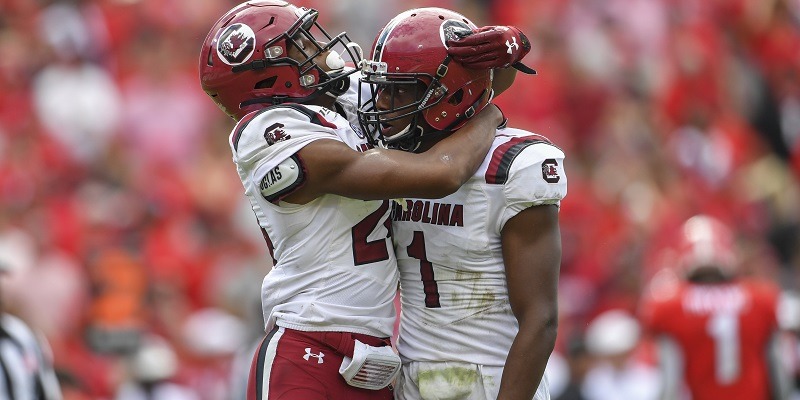 Georgia’s Rodrigo Blankenship missed a 42-yard field goal attempt wide left at the end of the second overtime Saturday as visiting South Carolina shocked the No. 3 Bulldogs 20-17 in Athens, Ga.

South Carolina (3-3, 2-2 SEC) missed a 33-yard field goal attempt at the end of the first overtime that would have won the game. The Gamecocks settled for a 24-yard field goal by Parker White to start the second extra period.

The Bulldogs (5-1, 2-1) had the ball first in overtime but turned it over on the second play, when Jake Fromm’s pass went off the hands of a receiver and into the arms of Israel Mukuamu for the sophomore cornerback’s third interception of the game.

Georgia trailed 17-10 before tying the game late in the fourth quarter.

With just over six minutes to play, the Bulldogs started at their own 4-yard line before driving the length of the field to tie the game on a 6-yard touchdown pass by Fromm to Demetris Robertson with 1:48 left to play.

But the Gamecocks weren’t done.

After a touchback put South Carolina at the 25, backup quarterback Dakereon Joyner drove the team to the Georgia 40 before head coach Will Muschamp opted for a 57-yard field goal attempt with 40 seconds left and the Gamecocks facing a fourth-and-3. White’s kick was short and wide, giving the Bulldogs another shot in regulation.

Georgia would get as close as the Gamecocks’ 38 before an illegal shift forced the Bulldogs out of field-goal range, sending the game at Sanford Stadium into overtime for the first time since 2015.

Leading 17-10 early in the third quarter, South Carolina had the ball inside its 10 when a personal foul on Bulldog linebacker Adam Anderson knocked freshman quarterback Ryan Hilinski from the game with a leg injury.

Fromm was 28 of 51 for 295 yards with one touchdown and three interceptions, including one that Mukuamu returned 53 yards for a score with 1:00 before halftime for a 17-10 Gamecocks lead.

Mukuamu also intercepted a pass at the South Carolina 35 with 9:25 to go in the game.