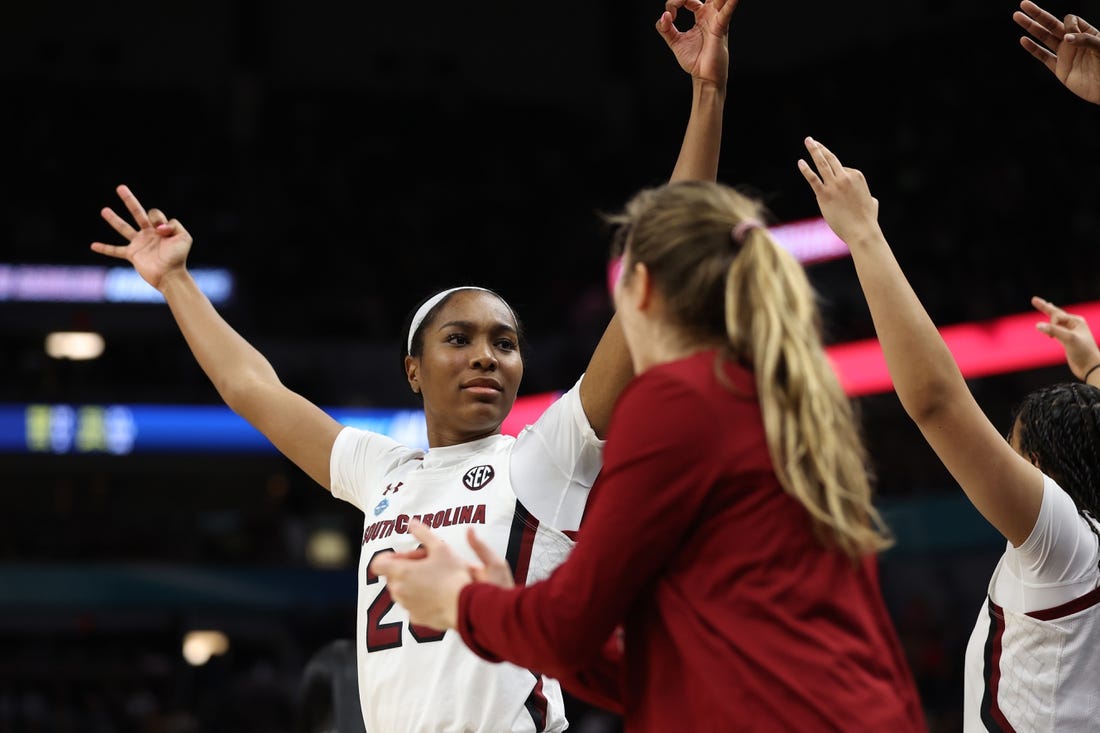 MINNEAPOLIS — South Carolina coach Dawn Staley’s focus is on the UConn team that will take the floor Sunday night, not the Huskies’ incredible history of success in the title game.

The Gamecocks (34-2) will face UConn (30-5) in the women’s national championship game Sunday at the Target Center in Minneapolis. The Huskies have won all 11 of their previous national title games.

South Carolina, which won the championship in 2017 in its only title game appearance, topped Louisville 72-59 in the semifinals. Consensus national player of the year Aliyah Boston collected 23 points and 18 rebounds for the Gamecocks.

UConn, whose last title in 2016 capped a run of four consecutive championships, ousted defending champion Stanford 63-58 in the other semifinal. The Huskies won their first national title in Minneapolis in 1995.

South Carolina lost to Stanford in the semifinals last season, 66-65.

In the NCAA tournament this year, the Gamecocks are holding opponents to 44.8 points per game.

“I think this game is going to come down to the intangible things,” Boston said. “The hustle plays and all the small things. I think this is going to be a great matchup.”

The Over/Under opened at 126.5 points at BetMGM but shifted to 125.5 with split action – 70 percent of the bets backing the Over while 72 percent of the handle supporting the Under.

Boston, a 6-foot-5 junior forward, is averaging 18.0 points and 15.0 rebounds in the NCAA Tournament and has 29 double-doubles this season. All five starters scored in double figures against Louisville.

“I don’t think it’s a stretch to say that she might be the hardest person in America to guard,” UConn coach Geno Auriemma said. “She scores if there’s one, two, three, four people on her. It doesn’t matter.”

UConn, appearing in its 14th consecutive Final Four, was bolstered by the return of Paige Bueckers, the player of the year last season as a freshman. She missed 19 games following knee surgery.

Bueckers, a high school standout at Hopkins, Minn., about 10 miles from the Target Center, had a team-high 14 points and five assists in the win over Stanford.

In UConn’s 91-87 double-overtime victory over No. 1 seed North Carolina State in the regional final, Bueckers scored 27 points, with 15 coming in the two overtimes.

UConn is without 6-5 forward Dorka Juhasz, who sustained a season-ending broken wrist against North Carolina State.

The Huskies outrebounded Stanford 46-37, but South Carolina leads the nation with a 17.5 rebound margin – and 19.4 in the tournament. UConn limited Stanford to 4 of 23 from 3-point range.

South Carolina defeated UConn 73-57 in the Bahamas tournament on Nov. 22. Boston collected 22 points and 15 rebounds for the Gamecocks, who held the Huskies to three points in the fourth quarter. Bueckers scored 19 for UConn.

Hendon Hooker’s fading Heisman Trophy odds took a hit with every touchdown Tennessee fell behind by at South Carolina on Saturday night. They officially ended when the senior quarterback suffered…