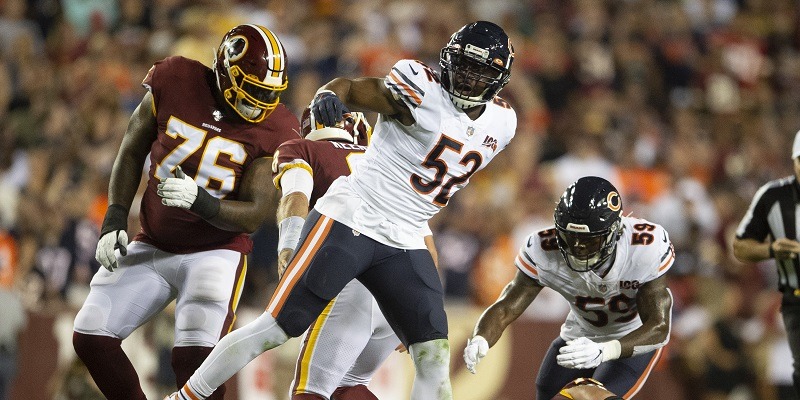 The big men take center stage as we enter the second quarter of the season, highlighted by a certain Chicago Bear facing his former team, the Oakland Raiders, in London.

If Mack’s “revenge game” had come last year, it would have been a bloodbath. It still might be, but Mack will have to get by a 6-foot-8, 380-pound wall first.

The Raiders replaced 2018 third-round pick Brandon Parker with Brown, the highest-paid offensive lineman in NFL history, at right tackle this spring. While he’s not worth quite that money, Brown has been very steady. His sheer girth makes bull-rushing difficult, but he also has surprising range and agility to keep speed rushes at bay. Mack will beat him in spots, but Brown will make it take time.

Mack likely will move to the other side occasionally, too, putting the onus on 2018-first-round pick Kolton Miller, whose anchor is stronger than in 2018 but probably not strong enough for Mack.

That’s where Jon Gruden comes in. Hoping not to be dismantled by the man he traded away, Gruden will employ a similar game plan to Week 1 against Von Miller, Bradley Chubb and the Denver Broncos. That plan featured a heavy emphasis on the run, repeated chip blocks and quick-timing passes, many of which could have been delivered with no protection at all.

The problem is that Chicago’s defense has fewer weak points than Denver’s, particularly at cornerback and inside linebacker. The Bears also have more dangerous interior rushers, led by Akiem Hicks (although he’s battling a knee issue). If Chicago can take away Derek Carr’s initial outlets, Mack will have time for a fair shot vs. Brown.

This rematch of a heavyweight battle from January’s divisional playoff game, featuring two of the league’s most powerful interior linemen, should be a doozy.

Despite the scoreline (Jones’ Kansas City Chiefs beat the Indianapolis Colts 31-13), Nelson mostly won the first battle. Jones managed three batted passes, but only one came against Nelson, who largely kept the 6-foot-6, 310-pounder away from the quarterback. Jones was credited with a QB hit, but it came on a slant away from Nelson.

Interestingly, Jones actually played his fewest snaps (31) of the season (excluding his Week 5 ejection) against the Colts, as he was subbed off on early downs in favor of 2018 third-round pick Derrick Nnadi. That spoke to Jones’ liability as a run defender, where he can penetrate and make splash plays but is often washed out of his gap.

Of course, run-blocking is Nelson’s specialty, especially washing defensive tackles as part of double teams. Likewise, running is the Colts’ clearest path to a victory Sunday night at Arrowhead. Indianapolis ranks 11th in the NFL with 4.65 yards per carry, while Kansas City’s defense is last in allowing a ghastly 5.87, nearly a half-yard worse than the next-worst team (coincidentally, the Colts at 5.46).

Despite being a first-round pick by the Green Bay Packers (23rd overall in 2010), Bulaga gets little fanfare. He’s a low-key, short-armed right tackle from Iowa with no career Pro Bowl or All-Pro honors in nine seasons. And yet, he remains steady as ever at age 30.

Bulaga has yet to allow a sack or commit a holding penalty this season, despite facing a gauntlet of elite pass rushers: Khalil Mack, Danielle Hunter, Von Miller and Brandon Graham. Of that group, only Hunter managed a quarterback hit against Bulaga, and it came six seconds after the ball was snapped.

He’s gotten chip-block help at times, but Bulaga has been extremely sharp with his feet, anchor and technique, managing to re-leverage his hands mid-rep without holding.

The only problem is health, as he left Green Bay’s Week 4 loss in the first half with a shoulder injury, and Light was a mess in his place. Aaron Rodgers did well to compensate, but Light short-circuited deep shots and several run plays by being beaten immediately.

Bulaga’s absence would be a major issue against Lawrence, who has 2.5 sacks and six QB hits through four games. Not only is Lawrence long and powerful, but he has rare body control, including a Eurostep move where he literally jumps in air before deploying a hand move (cross-chop to rip, double hand swipe, etc.) as he lands.

4. Deshaun Watson must help his line

Two weeks ago, we discussed how the Houston Texans’ O-line could be in trouble against the Chargers, but a reconfigured group actually impressed in L.A. First-round rookie Tytus Howard looked much more comfortable at right tackle, and second-rounder Max Scharping held his own at left guard. With Laremy Tunsil at left tackle, the group appeared stabilized, and Watson took advantage with critical late-in-the-down playmaking.

On Sunday, Watson took it too far. Of his six sacks against the Carolina Panthers, he had a quality initial pocket on four of them. Not all four presented an open receiver immediately, but Watson had time to get the ball away.

One sack was unavoidable — right guard Greg Mancz was beaten quickly by Shaq Thompson — but the final one (a critical sack-fumble in the fourth quarter) appeared to be on Watson. A safety blitz and stunts up front beat the protection, but tight end Darren Fells leaked to the flat on a hot route behind the blitz and was wide open. Watson saw the blitz but tried to evade it instead of throwing to Fells.

The Atlanta Falcons’ pass rush goes through lulls, but it can batter quarterbacks if given time. Watson must play more promptly and with discipline to help his line and protect himself.

5. Winston’s sailing won’t be so smooth vs. Saints

Winston and head coach Bruce Arians have a tougher challenge in New Orleans, where Saints coordinator Dennis Allen mixes up his calls as well as anyone. While not overly aggressive or complex, Allen’s scheme often appears complicated because it gets to base coverages in untraditional ways via late rotations.

Perhaps more important, the Saints’ defensive front is rolling, having manhandled the Cowboys’ touted offensive line on Sunday night. Cameron Jordan remains as dangerous as ever, and 2018 first-rounder Marcus Davenport is starting to flash, with eight QB hits (T-6th in NFL) through four games. Inside, David Onyemata is a wrecking ball, and Sheldon Rankins looked spry in his first game back from tearing an Achilles tendon in January.