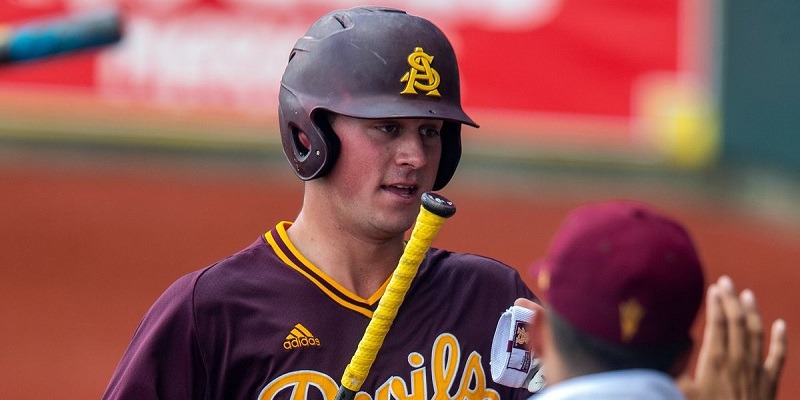 Torkelson was almost exclusively a first baseman for the Sun Devils this year, splitting one game between first base and the outfield.

The Tigers have first baseman Miguel Cabrera under contract for four more years at a total of $124 million guaranteed, which perhaps influenced the decision to move Torkelson to third base. Cabrera also has expressed his reluctance about becoming a full-time designated hitter over the past few seasons.

The most recent time a third baseman was selected No. 1 overall was 1992, when the Houston Astros selected Cal State Fullerton’s Phil Nevin first.

The only first basemen who topped the draft were Ron Blomberg (1967) and Adrian Gonzalez (2000), both left-handed hitters. Torkelson is a right-handed hitter.

Torkelson said on ESPN of his reaction to being drafted No. 1 overall, “Oh my goodness. I told my dad when it was five minutes after, ‘You could punch me in the face right now and I wouldn’t feel it.’ It is just the biggest adrenaline rush and the happiest moment in my life to this date. It’s unreal.”

The Tigers made the No. 1 overall pick for the second time in three years, having selected Auburn right-hander Casey Mize to open the 2018 draft. The only other time Detroit had the No. 1 selection, they selected Rice right-hander Matt Anderson in 1997. Anderson had a mediocre seven-year career in the majors, mostly as a middle reliever.

With the second overall pick, the Baltimore Orioles chose Arkansas outfielder Heston Kjerstad. The 21-year-old Texas native hit .448 with six homers and 20 RBIs in 16 games this year, leaving him with a .343 average, 37 homers and 129 RBIs in 150 career games for the Razorbacks.

The Miami Marlins used the third overall pick on University of Minnesota junior right-hander Max Meyer. In four starts this year, Meyer went 3-1 with a 1.95 ERA. He posted a 10-7 record and a 2.13 ERA while logging 187 strikeouts and 41 walks over 148 innings in 46 career appearances (15 starts) for the Golden Gophers.

The Kansas City Royals chose Texas A&M junior left-hander Asa Lacy with the fourth selection. Lacy went 3-0 with a 0.75 ERA in four starts this year and struck out 46 in 24 innings while allowing just nine hits. In three seasons with the Aggies, he went 14-5 with a 2.07 ERA, 224 strikeouts and 68 walks in 152 innings.

Vanderbilt junior infielder/outfielder Austin Martin, widely rated as one of the top two available prospects, fell to No. 5, where the Toronto Blue Jays selected him. The Jays announced him Wednesday as a shortstop.

The first high school player drafted was outfielder Robert Hassell III, who went No. 8 to the San Diego Padres. He played at Independence High School in Thompson’s Station, Tenn.

Commissioner Rod Manfred opened the draft broadcast with a speech in which he vowed that baseball would help spark positive change in light of protests over racism following the deaths of George Floyd, Ahmaud Arbery, Breonna Taylor and others.

The broadcast then cut to shots of all of the team executives set to make the draft picks, each holding up a sign that read, “Black Lives Matter. United for Change.”