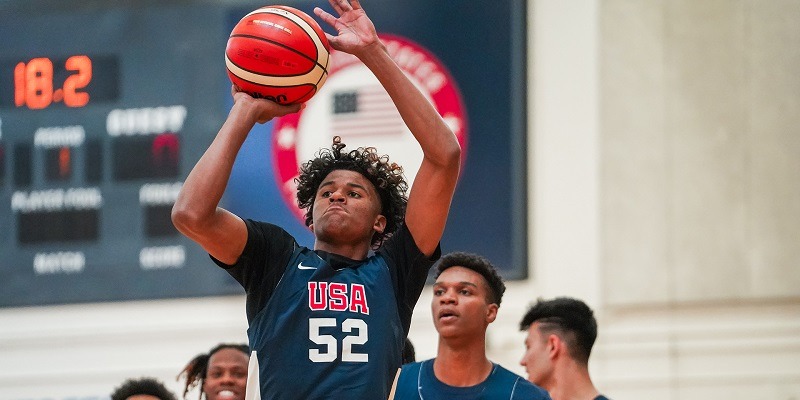 Five-star recruit Jalen Green will skip college and instead enter the NBA G League’s freshly revamped professional pathway program, becoming the first player to do so in a major landmark for the NBA.

Fellow five-star recruit Isaiah Todd, who decommitted from Michigan earlier this week, will also join the G League program, according to The Athletic, pairing with Green on a new team in Southern California.

According to ESPN, the reshaped program will group elite prospects on one team and pay them each at least $500,000, while serving as a one-year development program before they are eligible to enter the NBA draft.

Per ESPN, the program was bolstered after urging from NBA commissioner Adam Silver, who wanted the G League to interest players that might try to play professionally in Australia, as LaMelo Ball and RJ Hampton did this year. Talks with the NBA Players Association about eliminating the NBA’s one-and-done rule have gone nowhere, per ESPN.

“We have kids leaving the United States — Texas and California and Georgia — to go around the world to play, and our NBA community has to travel there to scout them,” G League president Shareef Abdur-Rahim told ESPN. “That’s counterintuitive. The NBA is the best development system in the world, and those players shouldn’t have to go somewhere else to develop for a year. They should be in our development system.”

The new G League system quadruples the previous player salary ($125,000) and will provide financial incentives for participation in games, community events and life skills programs, according to ESPN. The development team will focus on training and exhibition games, facing G League teams — about 10-12 games — but also international and academy teams.

Green, a 6-foot-5 combo guard from Fresno, Calif., made a formal announcement of his decision on social media Thursday, and the league welcomed him with a press release.

“We’re thrilled to welcome a player and a person of Jalen’s caliber to the NBA G League,” Abdur-Rahim said in a statement. “He represents the next generation of NBA players, and we couldn’t be more excited to have him develop his professional skills in our league. Jalen will learn from an NBA-caliber coaching and player development staff as he begins his professional basketball journey in the NBA G League.”

Green is ranked as the No. 3 overall prospect by the 247Sports Composite. He is also the nation’s No. 2 combo guard and the No. 2 player in the state of California, per the index.

Following a season in the G League, Green would be eligible for the 2021 NBA Draft.

Auburn, Memphis, Oregon, Florida State and Southern California were among the schools competing for a commitment from the McDonald’s All-American.

Todd, a 6-foot-10 prospect from Raleigh, N.C., announced Tuesday that he was decommitting from Michigan in favor of playing professionally for a year.

He is ranked as the No. 13 prospect in the nation by the 247Sports Composite, as well as the No. 2 power forward and the No. 1 player from North Carolina.