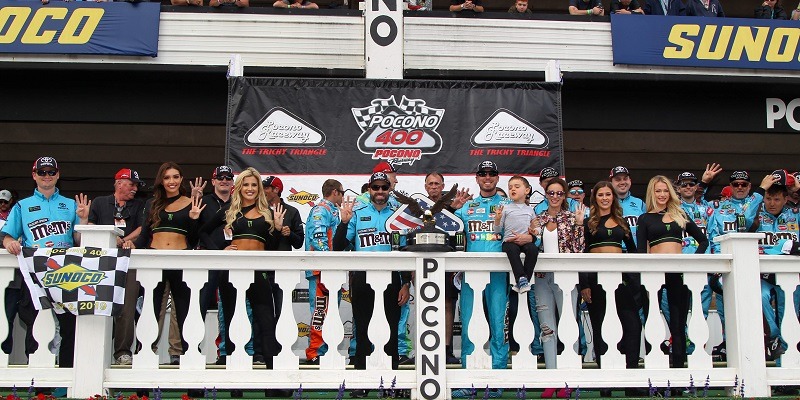 THIS WEEK: It’s a trip back to one of the longest tracks on the schedule, “The Tricky Triangle” at Pocono Raceway. With only three turns, each with a different radius and banking, and each straightaway a different length, it’s a unique challenge for the 21st of 36 points races this season and the second at the track since the beginning of June. … This will be the 84th race at Pocono, dating back to Richard Petty’s win in 1974. … Kevin Harvick won the race last week at New Hampshire Motor Speedway, his first win of the season. … Harvick has never won at Pocono. … Kyle Busch won the race here in June and he won the July race last season. … *Joey Logano leads the Cup standings with 783 points, followed by *Kyle Busch (780), *Harvick (691), *Denny Hamlin (669), *Brad Keselowski (663), *Martin Truex Jr. (654), Kurt Busch (638), *Chase Elliott (615), Aric Almirola (586) and *Alex Bowman (577) rounding out the top 10.

THIS WEEK: After racing at Iowa last week, the series heads to the last race before a long break and its stretch run of the season, with four races in five weeks starting at Pocono on Aug. 18. … There have been 35 races featuring Indy-style cars at Mid-Ohio since 1980. … The series will have run 13 of its 17 races this season at the conclusion of Sunday’s event. … Alexander Rossi won this race last year. … Josef Newgarden won last week at Iowa, his fourth victory of the season, to lengthen his points lead with just five races remaining. … American Newgarden leads the standings (487 points), followed by American Rossi (458), France’s Simon Pagenaud (429), New Zealand’s Scott Dixon (389) and Australia’s Will Power (322) rounding out the top five.

THIS WEEK: The German Grand Prix is up and Lewis Hamilton is looking to lengthen his series lead two weeks after winning his home grand prix in Great Britain. … The first German Grand Prix was held in 1926, but some years have been skipped, making this the 77th race in history. … This is the 11th of 21 races this season as the series races past the halfway point and the sport stays in Europe for four more consecutive races, including this one. … Great Britain’s Hamilton leads the standings with 223 points in his Mercedes, with Finland’s Valtteri Bottas, Mercedes, second (184), followed by Belgium’s Max Verstappen, Red Bull (136), Germany’s Sebastian Vettel, Ferrari (123), and Monaco’s Charles Leclerc, Ferrari (120).