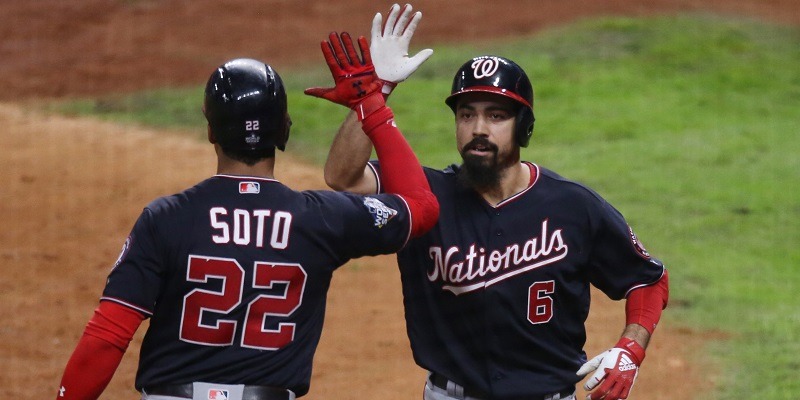 HOUSTON — Stephen Strasburg overcame a bumpy opening frame to pitch 8 1/3 sterling innings, and Anthony Rendon drove in five runs as the Washington Nationals forced a decisive Game 7 of the World Series with a 7-2 victory over the Houston Astros on Tuesday.

Rendon finished 3-for-4, including a two-run homer in the seventh inning and a two-run double in the ninth.

The result extended a historic run for road teams, who have won each game of this Fall Classic, a first in postseason history for that specific feat.

The Nationals will send Game 1 starter and ace right-hander Max Scherzer to the mound Wednesday in the finale. He will be opposed by Astros right-hander Zack Greinke. Scherzer, a late scratch prior to Game 5 due to neck spasms, declared himself fit for Game 7 after throwing in the outfield on Tuesday afternoon.

Strasburg (2-0) allowed two runs and three hard-hit balls in the first inning, but he blanked the Astros for the remainder of his outing. He wound up yielding five hits and two walks with seven strikeouts.

After Strasburg retired the first batter in the ninth, Sean Doolittle entered and set down two of the next three hitters to even the series.

George Springer greeted Strasburg with a double off the left field scoreboard on the first pitch of the first. Following a wild pitch, the Astros erased a 1-0 deficit when Springer scored on a Jose Altuve sacrifice fly. One out later, Alex Bregman delivered a solo homer to left field, with Strasburg eluding additional damage when Juan Soto caught a 364-foot blast from Yuli Gurriel at the wall in left-center.

Astros right-hander Justin Verlander (0-2) allowed an opposite-field, run-scoring single to Rendon in the first. Excluding his perfect frame in the second, Verlander labored over his five-inning stint. He stranded two runners in the third inning and two more in the fourth but surrendered solo homers to Adam Eaton and Soto in the fifth, with Soto smacking a 413-foot blast to right for a 3-2 lead.

Verlander allowed three runs on five hits and three walks with a season-low three strikeouts and fell to 0-6 with a 5.68 ERA over seven career World Series starts.

Rendon rendered a controversial umpiring decision moot with his first homer of the series in the seventh. Trea Turner was ruled out on interference when he clipped Gurriel, who was stretching while making a play at first base. Two batters later, Rendon belted a two-run homer off Astros right-hander Will Harris, marking the first run Harris allowed following 10 scoreless appearances in this year’s postseason.