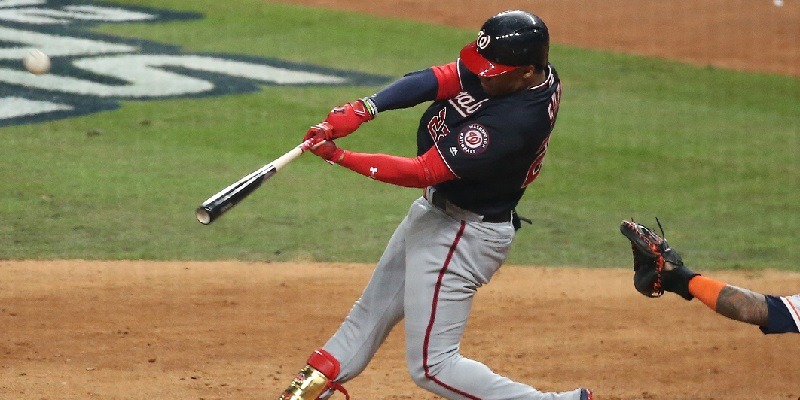 HOUSTON — Juan Soto recorded a three-hit, three-RBI game in his World Series debut as the Washington Nationals rallied for a 5-4 victory over the Houston Astros in Game 1 of the Fall Classic on Tuesday.

Soto drilled an opposite-field, game-tying home run leading off the fourth inning. He delivered a two-run double, also to the opposite field, an inning later to cap the Nationals’ three-run uprising off Astros ace Gerrit Cole (0-1).

Soto pulled the Nationals even at 2-all with his 417-foot blast onto the train tracks above left-center field. Cole, 19-0 with a 1.59 ERA over his previous 25 starts, had already surrendered a solo homer to Ryan Zimmerman with two outs in the second inning. By the time Soto strolled to the plate in the fifth, the Nationals had secured a 3-2 lead.

Two batters after Adam Eaton produced a run-scoring single to right, Soto lined a 3-2 slider from Cole off the scoreboard in left. Victor Robles and Anthony Rendon scored on the play, with Rendon coming home from first base after the ball caromed past left fielder Michael Brantley.

Scherzer responded by retiring the side in order for the first time in the bottom of the fifth. He’d allowed a two-run, two-out, two-strike double to Yuli Gurriel in the first inning after holding batters to an 0-for-17 mark with runners in scoring position this postseason.

An inability to deliver with runners in scoring position plagued the Astros throughout. George Springer singlehandedly attempted to carry Houston back to the lead, with his leadoff homer in the seventh against Nationals right-hander Tanner Rainey cutting the deficit to 5-3 before his RBI double an inning later sliced the margin to one run.

However, Nationals left-hander Sean Doolittle entered and retired Brantley to strand Springer on second, then retired the side in order in the ninth to earn the save. Houston finished 3-for-12 with runners in scoring position and stranded 11 baserunners.

Cole wound up allowing five runs on eight hits and a walk with six strikeouts in seven innings.

Washington will look to head home with a 2-0 series lead when Stephen Strasburg takes the mound opposite Justin Verlander in Game 2 on Wednesday.