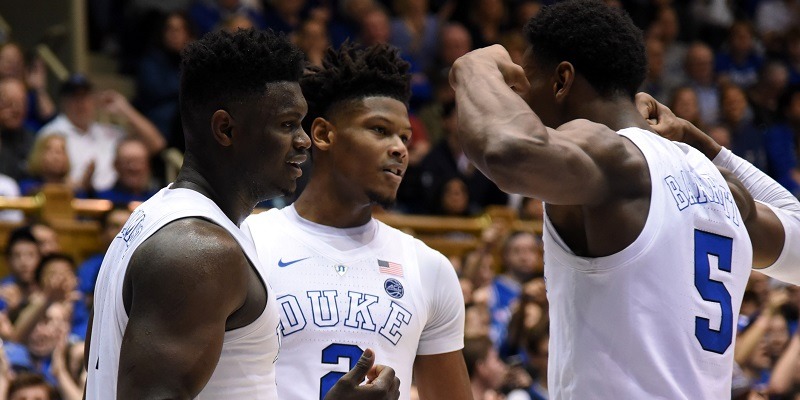 The Nike malfunction and subsequent Grade 1 right knee sprain Duke freshman Zion Williamson suffered Wednesday against North Carolina sidelined him for Saturday’s clash at Syracuse.
The Blue Devils confirmed the news, which had been expected, Saturday before the game at the Carrier Dome.
Williamson was flashing toward the free-throw line in the opening minute of Wednesday’s Atlantic Coast Conference rivalry showdown when he planted his left foot and his shoe ripped open, sending him sprawling awkwardly to the court. His right knee struggled to support his weight
Williamson did not return to the 88-72 loss and Duke head coach Mike Krzyzewski later said that the sprain was mild. Williamson’s timetable for returning to the court is unknown, although Duke has labeled him “day-to-day.”
The No. 1 Blue Devils (23-3) next play at No. 20 Virginia Tech on Tuesday. Duke lost to Syracuse 95-91 in overtime on Jan. 14 in their only other meeting this season, but went on to win its next nine games before Wednesday’s loss to North Carolina.
Syracuse head coach Jim Boeheim will be on the bench for Saturday’s game. Boeheim was involved in an accident late Wednesday night when the car he was driving struck and killed a pedestrian on a Syracuse highway.
Because of Boeheim’s accident, and the death of 51-year-old Jorge Jimenez, ESPN elected to move its Saturday pregame “GameDay” show from Syracuse. It was instead held at Bristol, Conn., studios instead.
–Field Level Media