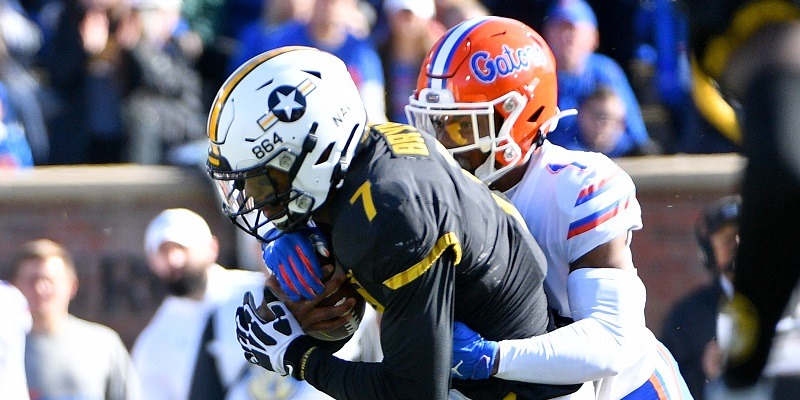 A former four-star recruit, Henderson became the only true freshman in school history to record an interception return for a TD in consecutive games. He picked off six passes in 33 career games, including four as a freshman. He was first-team All-SEC in 2019, when he broke up 11 passes despite missing three games due to an ankle injury and sitting out the bowl game.

Henderson blazed a 4.39-second 40-yard dash (T-third-fastest among CBs) at the NFL Scouting Combine, and also finished better than average in both jumps.

Henderson is a long-levered, highly athletic cover corner. Comes with an NFL starter kit right out of the box, boasting prototypical height, arm length, quickness, agility and acceleration. Well-versed in press and off-man coverage with experience playing both sides, nickel and even sliding back to safety on occasion — a testament to his football IQ. At his best locked up in one-on-one coverage, showing the light feet and good knee bend to gain depth in his backpedal or when switching to the side-shuffle technique. Good length and strength for the jam when he wants it, but isn’t reliant upon it, boasting the raw athleticism to run with the speediest of receivers. Terrific balance and acceleration when changing direction, maintaining close proximity to receivers to keep passing lanes tight.

While a capable tackler, Henderson is very willing to let his teammates do the dirty mop-up work. Throttles down on running plays headed away from him, drifting toward the action with conservative pursuit angles, and will miss plenty of attempts on his own. Failed to record an interception in 2019, although he broke up a career-high 11 passes.

Joe Haden, Pittsburgh Steelers — Henderson grew up idolizing Haden, another former Gator, and initially wore the same No. 5 jersey before switching to No. 1 as a junior. It isn’t just the uniform that makes these corners comparable, however, as Henderson possesses a similarly lanky frame with electric athleticism.