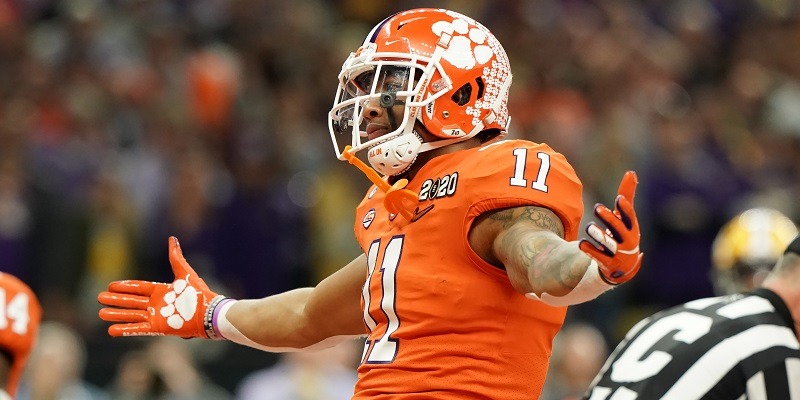 After redshirting and competing in the long jump for Clemson’s track and field team in 2016, Simmons debuted on the football field at safety in 2017, notching 49 tackles (three for loss) and five pass breakups in 14 games. Defensive coordinator Brent Venables moved him to outside linebacker in 2018, and Simmons took off, collecting 89 tackles (nine for loss) an interception and three forced fumbles. He considered entering the 2019 draft but returned to cement himself as a first-round pick. He did so resoundingly, piling up 102 tackles (16 for loss), eight sacks and three interceptions while winning the Butkus Award as the nation’s top linebacker.

There are so many reasons to love Simmons, who fits the prototype of a modern-day, multi-positional defensive weapon. A former track star, he’s one of the best athletes in the entire draft, with outstanding speed, explosiveness and fluidity despite above-average height and length. He’s built like a big linebacker but moves like an undersized safety, a unique combination of skills that led Clemson to deploy him all over the field: linebacker, edge rusher, safety, nickelback, even outside cornerback. Simmons impressed in all areas, showing tremendous man-to-man coverage ability against a variety of players, but also hounding quarterbacks as a blitzer and edge rusher. His instincts, effort and positive attitude will allow him to thrive anywhere, giving his defensive coordinator myriad options.

Simmons isn’t a classic thumper, and he might not fit teams that want a stack-and-shed type. He’s still new to playing linebacker, so there will be growing pains. His zone-coverage awareness could use some polishing, as he can be baited into vacating his position at times. His versatility might not appeal to teams that run simpler defenses, because much of his value comes in the ability to be deployed anywhere.

Derwin James, Los Angeles Chargers/Tremaine Edmunds, Buffalo Bills — Simmons is so unique that there’s no reasonable one-for-one comparison, but his skill set could be described as a mix between James and Edmunds. Simmons is a few inches taller and about 15-20 pounds heavier than James, but he can be deployed in many of the same ways, from playing deep to lurking in the box or on the edge. Edmunds is a bit bigger than Simmons, but he would be a good approximation of what the Clemson product could be if his new team wanted to keep him primarily at linebacker. Simmons is a rare talent who is clearly worthy of a top-10 pick, even if used purely as a safety.