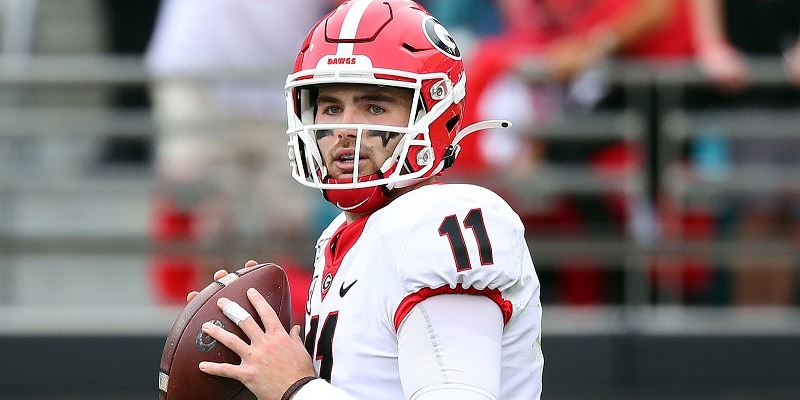 No stage is too big for Fromm. He led Georgia to the CFP title game as a true freshman — having taken over for an injured Jacob Eason — before falling in overtime as Tua Tagovailoa rallied Alabama. Fromm ultimately caused two five-star QBs to transfer — first Eason, and then Justin Fields, who couldn’t win the starting job in 2018. In a relatively low-volume passing game, Fromm threw for 8,236 yards, 78 touchdowns and just 18 interceptions over three seasons, but his completion percentage (67.4 to 60.8) and yards per attempt (9.0 to 7.4) dipped badly on a depleted offense in 2019.

Fromm’s below-average physical traits stood out like a sore thumb at the NFL Scouting Combine, where his throws lost energy and wobbled on intermediate and deep throws (it didn’t help that he threw directly after the howitzer-armed Eason). He also failed to break 5.0 seconds in the 40-yard dash.

Fromm has everything you want from the neck up at the position. He’s smart, confident and a hard worker who teammates love to play for. The intelligence and confidence transfer to the field, where he reads defenses well pre-snap, makes smart decisions and shows strong poise amid pressure. He is a quick, accurate distributor underneath who can put touch on the ball and has a feel for timing and anticipation. He won’t repeatedly avoid pressure, but he flashes pocket awareness and knows when to protect the ball. A seasoned veteran with 43 starts for an excellent SEC program, Fromm has handled a heavy load mentally in a pro-style offense that asks him to read the full field. He won’t put the ball in harm’s way. He was ineligible to participate but attended Senior Bowl practices and met with executives in Mobile.

Physical tools are the biggest knock on Fromm and the reason why many feel his ceiling is limited. He doesn’t have the power to consistently drive deep downfield or make opposite-hash throws, and as much as a flash of pressure can often ruin an opportunity for a big play. To his credit, he knows his limitations, but there are times when he plays a bit too risk-averse. Likewise, his accuracy dips at deeper levels, likely because he must put more effort into the throw. Fromm also is not remotely mobile, totaling 40 career rushing yards and showing little ability to evade rushers with more than a step-up or lateral slide. He won’t fit teams that favor bootlegs and rollouts.

Andy Dalton, Cincinnati Bengals — Andy Dalton is more mobile than Fromm, but both players tend to be a function of the offense around them. Give them a quality offensive line and a few weapons, and they can carve up defenses. With a weaker supporting cast, however, the upside is limited. It’s hard to picture Fromm flopping because he’s experienced, understands the game and by all accounts has excellent character. But he might top out as a starter whose team is always looking to upgrade.