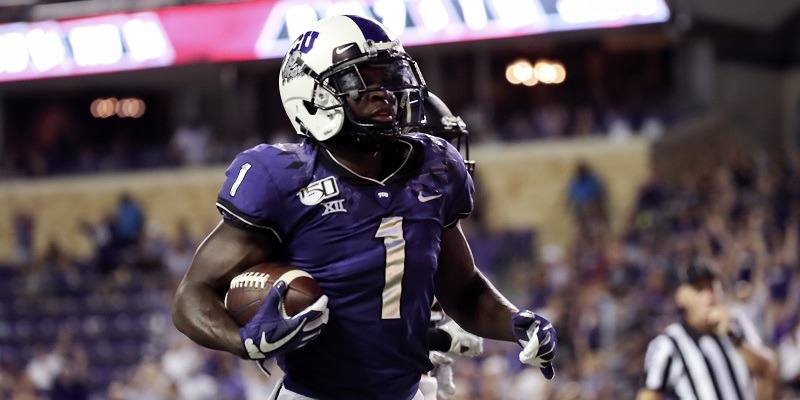 A touted recruit in football and track, Reagor recorded a national-best 26-foot long jump as a prep in 2016, and was an immediate impact player for TCU. Caught 148 career passes for 2,248 yards, scoring 25 touchdowns (22 receiving, two rushing and one returning). His father, Montae Reagor, played defensive tackle in the NFL for nine seasons. Jalen averaged 17.8 yards on 23 career punt returns.

Reagor’s 4.47-second 40-yard dash at the NFL Scouting Combine was actually higher than expected, but he was outstanding in the jumps, finishing second among wideouts in the broad (138 inches) and tying for second in the vertical (42).

A diminutive, big-play specialist, Reagor offers lightning in a bottle as a receiver and returner. Boasts exceptional straight-line speed and elusiveness, making it very risky for cornerbacks to challenge him in press coverage. Easy athleticism demonstrated with his ability to sink his hips and explode out of his cuts at the stem, sparking instant separation with cornerbacks. Tracks the ball well over either shoulder but isn’t reliant on verticals, showing strong, reliable hands. Has the courage to run into traffic as a returner.

Reagor ran a limited route tree at TCU and will need time to adjust to a more pro-style attack, although he does possess the agility to project as a quality route-runner. Undersized with a relatively tiny catch radius. Some concentration drops on tape. Needs to do a better job of protecting the ball after the catch, swinging it wildly, at times. Fumbled six times over the past two seasons. Alert downfield blocker but is more pesky than powerful and too often easily discarded by defenders.

Brandin Cooks, Los Angeles Rams — Reagor lacks the bulk most clubs are looking for in a true No. 1 target but could be an ideal complementary speed threat well worth Day 2 consideration.