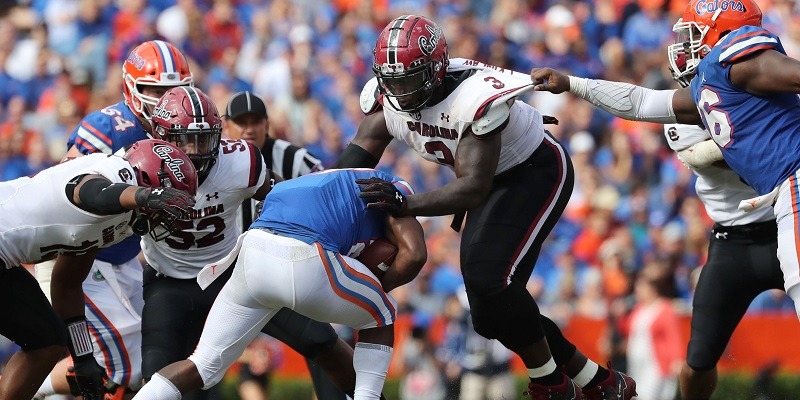 If the football public wasn’t fully aware of Kinlaw before the Senior Bowl, they were after he dominated early practices with arguably the best performance of the week to bolster his first-round stock. That came after a senior season in which he earned first-team AP All-America honors (35 tackles, six sacks). He spent his first season at Jones County Community College (Miss.), and he matured after arriving at South Carolina in 2018, dropping 40 pounds from his time in JC. He had three-year totals of 93 tackles (18 for loss), 10.5 sacks and 10 pass break-ups.

Kinlaw sat out after two days at the Senior Bowl due to a knee issue, which also kept him from participating at the NFL Scouting Combine.

A freakish talent, Kinlaw boasts an exceptional combination of size and raw athletic ability. Rare initial burst for a man of his size, consistently surprising opponents with his explosive start off the snap. The proverbial bull in a china shop as a rusher, ripping, spinning and slicing his way through contact to wreak havoc. Explosive upper-body strength to extend his arms and shed blockers. Terrific effort in pursuit to the flanks and downfield, showing off his unique speed. Appears to be just scratching the surface of his potential. Endured a tough upbringing, including numerous moves and brief homelessness.

Kinlaw is a better athlete than football player at this point, too often rushing blindly upfield and leaving himself vulnerable to savvy play-callers who take advantage of his aggression. Plays with blinders on and is susceptible to delays like draws and screens running right past him. Among the more explosive players in the country but lacks functional football strength, at times, by losing the leverage battle and failing to protect his chest. Knocked to the ground too often for a player of his talent. Possesses the frame to suggest that he could handle 5-tech duties as a traditional 3-4 defensive end but is more of a penetrator than a block-eater at this point.

Chris Jones, Kansas City Chiefs — The team willing to invest an early draft pick in Kinlaw could be handsomely rewarded as the Chiefs were with their gamble on the 6-6, 310-pound Jones with the 37th pick of the 2016 draft. Make no mistake, Kinlaw is raw, with some of his mistakes nearly as glaring as his highlights. However, his upside is immense, and his selection will generate plenty of excitement.