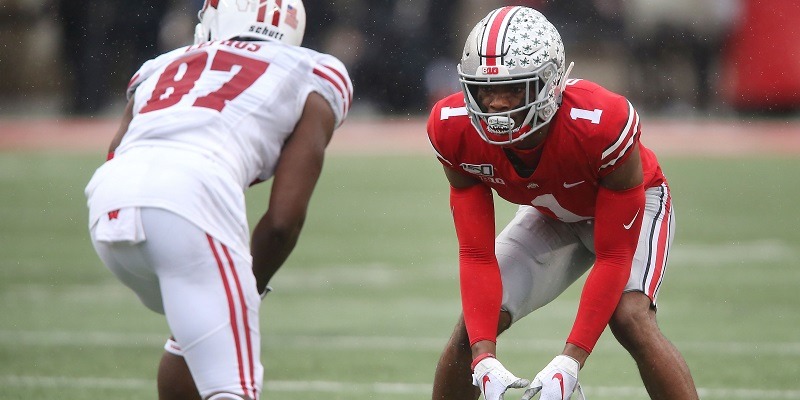 A 2019 unanimous All-American, Okudah rates among the best cornerback prospects in the past decade, capping his college career by playing to rave reviews in the College Football Playoff semifinal loss to Clemson. Rated the No. 1 cornerback in the 2017 recruiting class, Okudah had a breakout sophomore season and finished his three seasons in Columbus with 86 tackles, 10 passes defensed, four forced fumbles and three interceptions.

Okudah shook off a scary fall at the NFL Scouting Combine to have a fantastic all-around workout. His 40-yard dash (4.48 seconds) was terrific for a 6-1, 205-pounder, and he had the longest broad jump (135 inches) and tied for the highest vertical (41 inches) among all cornerbacks.

Okudah’s elite athleticism immediately jumps off the tape. Light feet and loose hips allow him to confidently press receivers at the line of scrimmage and stick to opponents like he’s their shadow. Very fast for a big cornerback, mitigating opposing deep threats. Aggressive at the point of attack, flashing a stiff jab to knock receivers off their route and ruin timing. Springs out of his backpedal, showing an immediate burst due to his swivel hips that allow him to change directions on a dime. Possesses the football IQ to handle zone coverages and late switch-offs, showing the route anticipation and gambling mentality to drop his primary assignment and make plays on the ball. Does not back down from the challenge of bigger receivers, showing explosive leaping ability and good timing to challenge at the highest point. Showed significant improvement with his hands in 2019 and possesses the hand-eye coordination and route anticipation for more in the NFL. Won’t wow you with his physicality, but he shows good awareness and technique to rip free of receiver blocks with strong, active hands. Reliable open-field tackler with terrific hand-eye coordination to lasso the feet of ball carriers seemingly out of his grasp. Durable performer with little injury concern and a three-year producer (two-year starter) for a program rich in history at the position. Impressive resiliency and mental toughness on and off the field.

Okudah plays with such an aggressive nature in coverage that he often arrives just as the ball does (or slightly before), which will draw an occasional penalty. Recorded only three interceptions over his career (all in 2019) among 18 pass breakups, sometimes showing more focus on disrupting passing lanes than creating turnovers. A bit of a duck-and-swipe tackler, although opponents rarely get by him. Is not the type to jump into the pile, with just 20 of his 86 career tackles coming on assists (just six in 2019).

Darius Slay, Detroit Lions — The term “lockdown corner” is too often thrown around, but Okudah deserves this praise, possessing the agility, acceleration and grit to eventually rank among the NFL’s elite cover men. The similarly-built Slay, who was clocked at 4.36 seconds in the 40-yard dash at the 2013 combine, has earned Pro Bowl honors in each of the past three years.