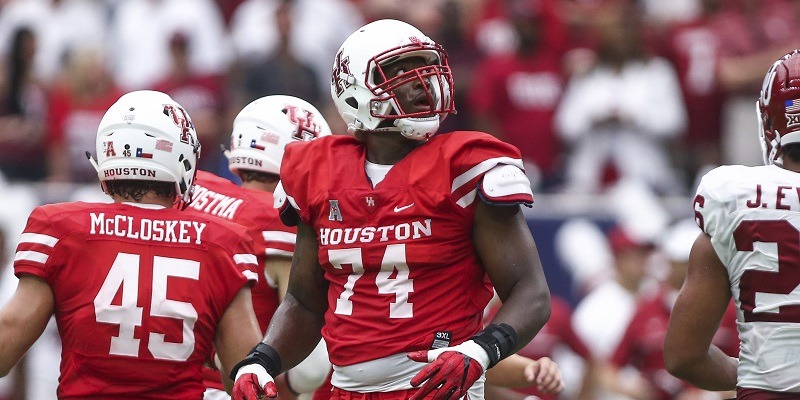 A durable lineman who was projected as an early-round pick in 2019, Jones decided to return to Houston, where he wound up a four-year starter. He considered quitting football during his first year on campus while redshirting but has matured since.

After a shaky start, he shined at the Senior Bowl as one of the best tackles during practice. Jones’ performance at the NFL Scouting Combine was just OK, especially considering other top prospects tested extremely well.

Jones is a broad-shouldered, long-armed left tackle with impressive functional quickness and power. Loves to engage with his hands, showing a strong jab and iron-like grip to snatch, sustain and sumo when he feels defenders off-balance for impressive pancakes (including to North Carolina’s Jason Strowbridge during Senior Bowl week). Not asked to drive block often in Houston’s scheme but shows power and some nastiness when doing so. Surprisingly quick when asked to pull, altering his route to consistently hit moving targets at the second level, including top-notch athletes (Oklahoma).

While quick in short spaces, Jones begins to lumber before long, making him reliant on his ability to anticipate where defenders are going. Was aided by playing in an up-tempo offense with a highly mobile quarterback. Doesn’t have experience at right tackle or guard, but put some work in there for scouts in Mobile.

Russell Okung, Los Angeles Chargers — The 6-5, 310-pound Okung played at Oklahoma State, which is where Jones originally committed. Both are steady-eddies in terms of technique, torque and toughness, winning often despite relatively average athleticism.