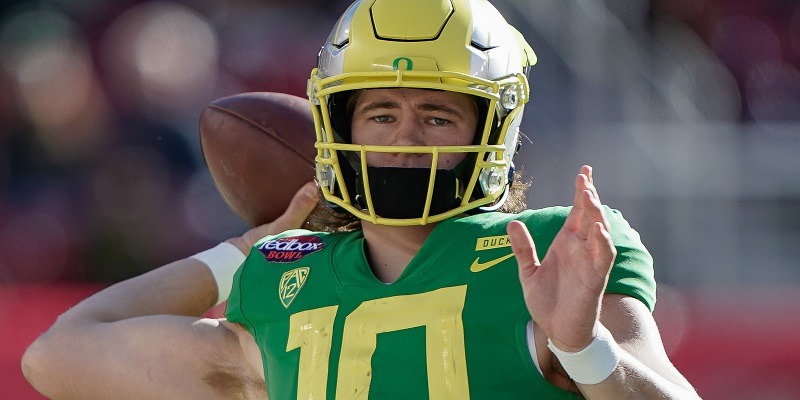 Herbert, a three-star recruit, started 42 games at Oregon, capping his career with an MVP award in the Rose Bowl when he rushed for three touchdowns — including a 30-yarder — in a 28-27 win over Wisconsin. A good athlete for his size, he reached career passing totals of 10,541 yards and 95 touchdowns, with 23 interceptions. A two-time academic All-American likely to impress with his mental skills on and off the field.

Herbert impressed throughout the week at the Senior Bowl and won the game’s MVP, then impressed — as expected — at the NFL Scouting Combine. His 4.68-second 40-yard dash tied for third-fastest among quarterbacks, and he had the fastest 3-cone time (7.06) while placing top-three in the jumps.

Herbert was easily the most consistent, accurate passer at the Senior Bowl. Physical prototype with rare size for the position and weight evenly distributed on an athletic, toned frame. Has a rocket for a right arm, showing above-average velocity when he can step into passes and the ability to zip passes at a three-quarters arm angle with defenders tearing at his legs. You can hang laundry on his frozen ropes to the sideline from the opposite hash, easily checking the traditional “deep out” box. Quick set-up and delivery of the football with quick release — rare for a quarterback with his long limbs. Generally an accurate passer, flashing the ability to make the “special” throw, including on tightly covered out-breaking routes deep down the sideline, late crossers and posts over the middle (Washington 2019) and while back-pedaling against pressure. Stares down the barrel and will deliver accurate tough-guy throws with defenders closing in, inspiring teammates. Runs like a deer, getting to top speed quickly and galloping for chunks of yards when the defense allows it. Pillow-soft touch on passes to backs in the flats and tight ends down the seam, dropping it over defenders’ out-stretched arms and making the catch easy for teammates. Humble, polite and intelligent.

Herbert is inconsistent with his footwork and follow-through, leading to too many off-target throws for a four-year starter. Flashes exciting accuracy while on the move (Auburn) but tosses far too many worm-burners, with the ball often skipping at the feet of intended receivers. Doesn’t re-set well enough and throws too many half-cocked passes, spraying the ball and making it difficult on his receivers. Ugly throw out of the back of the end zone in the closing seconds against Auburn epitomize a reputation for failing to deliver in high pressure situations. Small-town, soft-spoken personality, which may make him the perfect candidate to marry your daughter but not necessarily the field general some expect at quarterback. He said he worked during his senior season to make himself more “uncomfortable” by being more vocal. Comes with some medical concerns. Broke his femur as a junior in high school (2014), an injury that resulted in surgery, including the insertion of screws. Right-hander broke his left collarbone as a sophomore in 2017.

Ryan Tannehill, Tennessee Titans — Tannehill played receiver early at Texas A&M before making the transition to quarterback, earning his selection with the eighth overall pick by Miami in 2012 in part because of his seemingly untapped potential. The team that gambles on Herbert is banking on his exceptional physical traits and work ethic. He is not, however, the “sure thing” that his statistics (and hype) suggest.