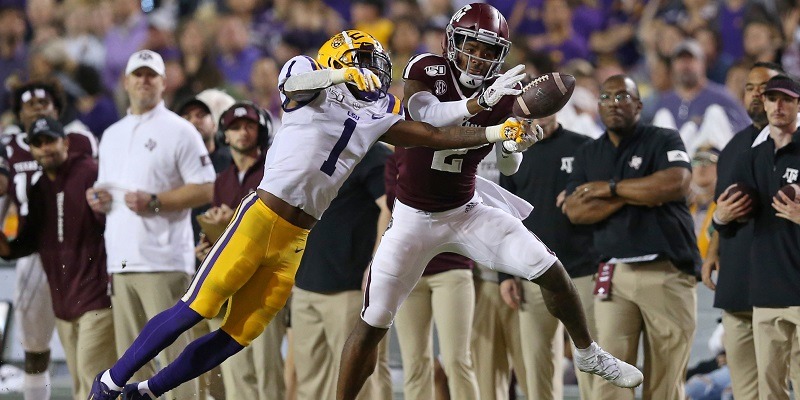 Fulton is a two-year starter who had 25 passes defensed in the past two seasons, with two being interceptions. The lack of more picks over his career is mitigated by the fact that he simply did not get many opportunities, as quarterbacks generally avoided his side of the field.

Fulton passed on the Senior Bowl, citing LSU’s long season and a family issue. He returned for the NFL Scouting Combine, impressing in the 40-yard dash (4.46 seconds) and the 3-cone drill (6.94, T-5th among CBs).

Fulton is a classic cover corner with springs in his legs to generate immediate burst out of his breaks and downfield. Easy athleticism allows him to turn and run with the swiftest of receivers. Composed and confident when lined up in press coverage, where he was rarely challenged. Only occasionally lines up off, but shows patience when doing so, as well as the quick burst to close whether in man or zone coverage. Good size to handle bigger receivers and does not back down from a physical challenge.

Fulton offers good but not elite size and is a bit slimmer in his lower half. Average tackler and is more of an ankle swiper, jersey-grabber than a hitter. Does occasionally mistime his leap (Texas) in jump-ball situations. Suspended for the 2017 season after being caught attempting to use someone else’s urine for an NCAA PED test. A two-year NCAA suspension was reduced to one on appeal. Fulton later said he was concerned the test was for marijuana.

Marcus Peters, Baltimore Ravens — Off-field concerns threatened the draft stock for both players, but the talent is undeniable, warranting Day 2 consideration. Fulton isn’t quite the gambler that Peters is, but he’s a similar athlete with Pro Bowl potential.