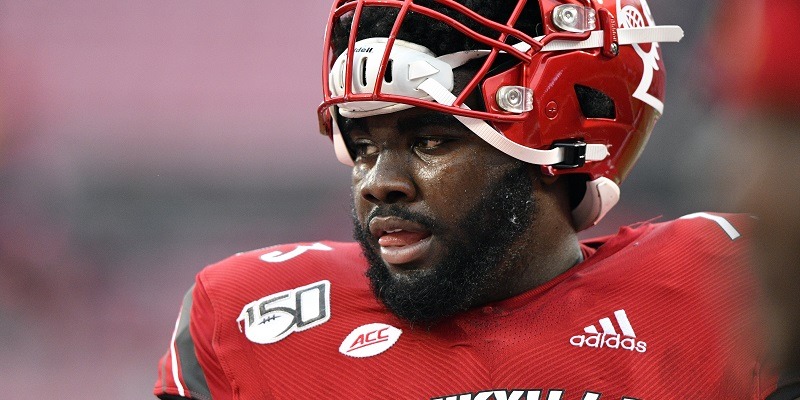 Becton started 34 games at tackle in three seasons for Louisville, signing with the Cardinals as the highest-rated prep OT from the state of Virginia over offers from Georgia, Michigan and Oregon, among others. Has plenty of experience blocking from left and right tackle with Louisville frequently rotating its linemen.

He wowed at the NFL Scouting Combine by running a 5.10-second 40-yard dash at 364 pounds, an incredibly rare feat.

Becton possesses a freakish combination of size, power and athleticism. Simply massive, with his weight remarkably well distributed throughout his frame, including over his very long, thick limbs. Remarkably light on his feet for a man of his size. Eases off the snap, “lightly” skipping to his left to shut down the outside and sliding back inside as necessary. Keeps his feet tapping throughout the play. This mobility, combined with the 2×4’s Becton has for arms, makes it nearly impossible for edge rushers to get around him. Becton isn’t just long — he’s quite strong, lifting and tossing opponents at times. Plays with poise.

Despite catcher mitts for hands, Becton too often is out of the strike zone with his placement, allowing defenders to slip out of too many blocks. Like a lot of big blockers, he bends at the waist, and his feet slow as he tires, resulting in some leaning on opponents and leaving himself vulnerable to quick counters, especially to the inside. Could do a better job of finishing opponents. Played in a spread scheme that asked him to line up in the two-point stance most of the time.

Bryant McKinnie, retired — It’s hard to find anyone bigger than Becton on a football field, and it’s exceedingly difficult to find one who moves to well. McKinnie would be one example, while Raiders right tackle Trent Brown also could fit. There are more polished blockers in a quality class of offensive tackles, but few can match Becton’s All-Pro upside.