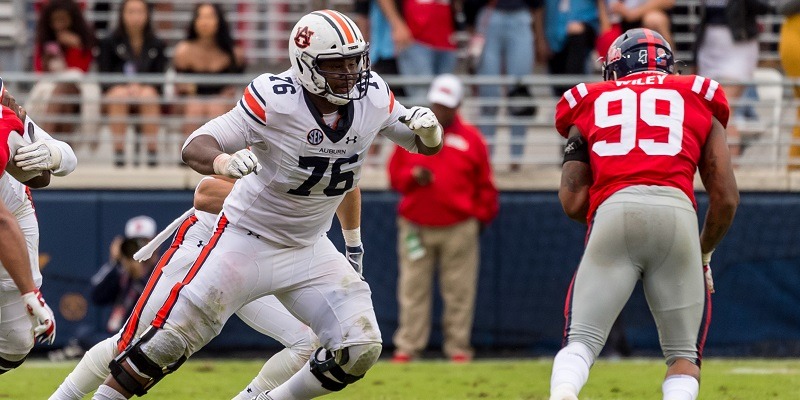 Born in Nigeria, Wanogho was actually a prince, as his grandfather was the king of the village where he grew up. Despite starting football late, he became a three-year starting left tackle for the Tigers, and also has extensive experience on the right side due to Auburn frequently running unbalanced lines. He earned second-team All-SEC honors in 2019.

Swelling in his knee kept Wanogho from participating at the Senior Bowl or at the NFL Scouting Combine, though he was expected to be healthy by late spring.

A physical specimen, Wanogho combines prototypical size with elite athleticism for the position. Exceptional foot quickness for a man of his size, easily sliding left and right in pass protection and quickly climbing to the second level when run blocking. Excellent straight-line speed for an offensive tackle. Naturally powerful man who can generate movement at the point of attack when he keeps his pads low. Impressive upper- and lower-body strength, including the leg drive to move the pile.

Wanogho is not (yet?) the sum of his parts, failing to master several baseline technical aspects of the game despite his extended experience. Is often a beat late off the snap, appearing to react rather than anticipating the snap. Has the foot speed to mirror edge rushers but too often gets lazy, planting his feet and playing on his heels, leaving him vulnerable to counter moves and getting off-balance. Needs to develop better accuracy and power in his punch.

Jason Peters, Philadelphia Eagles — The team that gambles on Wanogho could be handsomely rewarded, as he is a special talent. Like Peters, who played tight end at Arkansas prior to emerging as a nine-time Pro Bowl left tackle, Wanogho will enter the league quite raw, despite his undeniable gifts and hype.