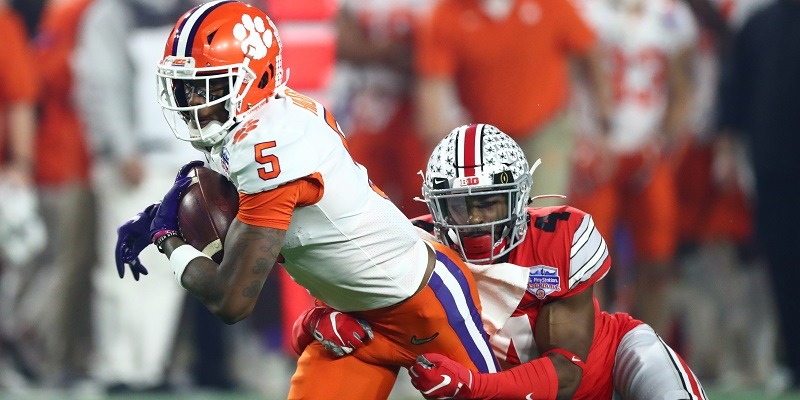 A five-star recruit and Clemson’ top prospect in the 2017 class, Higgins saw spot duty as a true freshman before flashing his potential in 2018, when he led the national-championship team in receptions (59) and receiving touchdowns (12). He made even bigger plays last season, averaging 19.8 yards on his 59 catches with 13 scores as the Tigers returned to the national title game before losing to LSU.

Higgins declined to work out at the NFL Scouting Combine, citing short preparation time after Clemson’s long season, although the decision fueled more concerns about his speed.

Higgins is built exactly the way you’d want for an NFL wideout. He’s tall, athletic and sinewy with long arms and big hands, making for a huge catch radius. Despite the height, he shows great coordination with his long limbs. He’s a maestro of the sideline catch, extending for throws well outside his frame while toe tapping inbounds. The size also comes in handy on contested catches and back-shoulder throws, which is where he does some of his best work. Higgins also shows surprisingly quick feet for his size and pretty good route-running chops, understanding the use of tempo and using a variety of techniques.

Higgins doesn’t have top-tier movement traits, so he’ll have to rely on his size and his body to win plenty of catches. He’s not always sudden off the line of scrimmage, and he has more build-up speed than twitchy acceleration. While he can create some after the catch, he’s not the explosive, game-breaker type of receiver that normally draws interest in the top 20 picks. Likewise, Higgins has done most of his work on the perimeter, particularly go routes, back-shoulder plays and comebacks. He’ll have to show he can handle more in-breaking routes in high-traffic areas.

Courtland Sutton, Denver Broncos — Higgins is more versatile than former Clemson product Mike Williams, but he wins in similar ways. Courtland Sutton might be the best comparison, as a downfield threat who wins with build-up speed, size and contested-catch ability. Sutton has developed his route tree nicely in the NFL. Higgins could do the same and be a red-zone threat immediately.