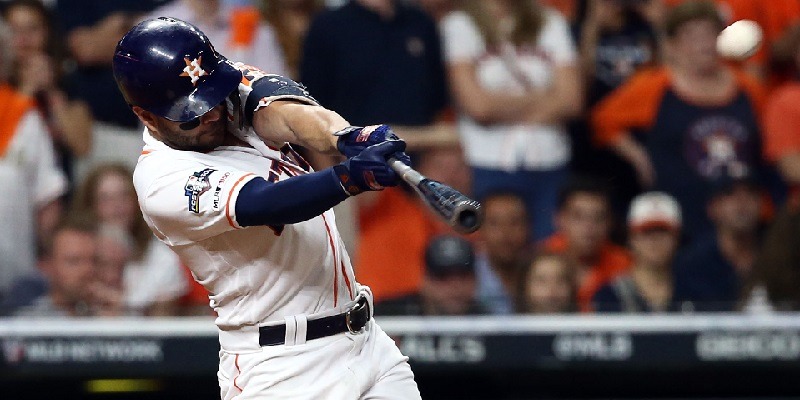 HOUSTON –Without quarrel or debate, Jose Altuve serves as the foundation on which the Houston Astros have built their burgeoning powerhouse. He is the heartbeat of a roster flush with All-Stars, the engine often called on at critical times.

And, more often than not, Altuve has delivered everything the Astros have needed in tense postseason moments. But with his resume already bloated with memorable performances, Altuve did not hesitate in acknowledging that what happened deep into the night Saturday at Minute Maid Park definitively trumped every thrill that preceded it.

Altuve drilled a walk-off, two-run home run in the ninth inning to cap a heart-stopping 6-4 victory over the New York Yankees, clinching the American League Championship Series in six games.

Altuve followed a two-out walk from George Springer with a 407-foot blast to left-center field off Yankees closer Aroldis Chapman (0-1). Altuve turned on a 2-1 slider to send the Astros to their second AL pennant in three seasons. Houston will host the Washington Nationals on Tuesday in Game 1 of the World Series at Minute Maid Park.

The Astros fashioned a first-inning, three-run home run from Yuli Gurriel, a resilient performance from seven relief pitchers on a designated bullpen day plus some sparkling defense into their third consecutive postseason series win against the Yankees, including the 2015 Wild Card Game.

“Continue to fight and work,” Yankees manager Aaron Boone said of narrowing the gap between his club and the Astros. “I feel like we are on equal footing with them. Unfortunately, sports can be a little bit cruel for the team that goes home and such can happen in the series.”

The Astros took a 3-0 lead when Gurriel drilled the first pitch from Yankees right-hander Chad Green into the Crawford Boxes in left field for a two-out homer that plated Altuve and Alex Bregman. Houston was 4-for-40 with runners in scoring position in the ALCS before the blast.

Trailing 3-1 in the third, the Yankees loaded the bases against right-hander Josh James — the second Houston pitcher of the game — with two outs, after Edwin Encarnacion worked a walk.

Right-hander Ryan Pressly entered and needed just one pitch to retire Didi Gregorius and stifle the rally, inducing a weak comebacker and applying the tag on Gregorius to end the threat.

With Aaron Judge on first with one out in the seventh, Encarnacion blooped a soft liner to left that Michael Brantley snagged on the dive. Brantley then sprang to his feet and fired a dart to Gurriel, who completed the inning-ending double play as Judge tried to scurry back to the bag.

Trailing 4-2 through eight, the Yankees fashioned a riveting rally against Astros closer Roberto Osuna (1-0) in the ninth, starting with a leadoff single from Gio Urshela, who had hit a solo homer in the fourth.

Two batters after Urshela’s single, first baseman DJ LeMahieu won a 10-pitch confrontation that included fouling off four two-strike pitches. When Osuna left a cutter over the plate, LeMahieu drilled it the opposite way into the first row of seats in right for a game-tying homer that silenced the crowd.

That deflating moment proved fleeting. When Houston called upon Altuve, he answered.

“I think we talk all the time about the talent on this team,” Astros manager A.J. Hinch said. “I think the resolve and the steady heads on this team, and just — we still play with a chip on our shoulder, which is good. We play with some mojo. And I think all of that adds into find a way to win the game.”