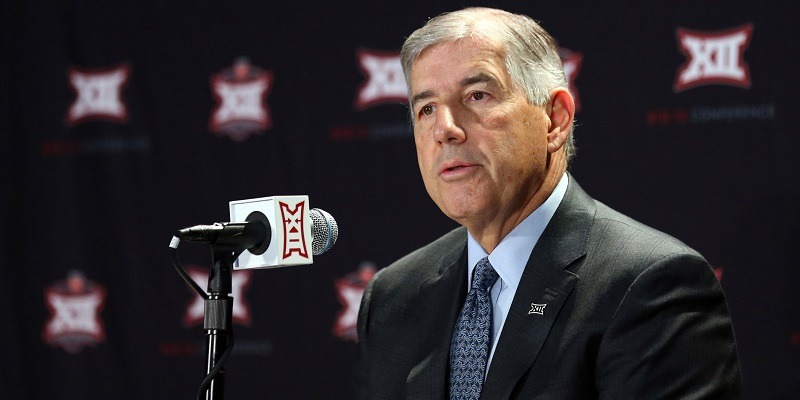 One day after Alabama head coach Nick Saban called for contingency plans for a late-starting college football season, Big 12 commissioner Bob Bowlsby shared deep concerns about the likelihood of a full season being played during the coronavirus pandemic.

“We don’t know when somebody is going to tell us it’s going to be OK to go back to close contact,” Bowlsby told ESPN. “I suspect that medical experts and scientists are going to be slow to give the green light on that. The magic start date is probably a mirage.

“It may be different in some high-density populations and areas than it is in more remote areas. It could be certain parts of the country and not other parts of the country. I don’t think there’s just going to be a day when we turn it all on again. There has to be a reacclimation period because athletes aren’t training at the same level they had been accustomed to.”

The Big 12 has closed facilities, and meetings are limited to teleconference and video conference between coaches and players.

Bowlsby said he is participating in active, daily discussions with Power 5 conference commissioners, and they will be synchronized in their goal for the season based on advice from health experts and the realities of social distancing.

Some experts have estimated the pandemic will impact large gatherings into the early stages of fall. The college football season is scheduled to begin the last week of August.

Iowa State coaches agreed to reduced salaries and are passing on bonuses. The conference lost $6.6 million, Bowlsby said, in expected revenue when the men’s conference basketball tournament was called off on March 12. Total projected losses are in the range of $18 million to $20 million.

“Virtually every program is highly reliant on football revenue,” Bowlsby told ESPN. “We’re making lots of contingency plans, but if you don’t get the anticipated number of games in, you lose the donations, you lose the sponsorships, you lose the gate receipts and you lose the TV. It’s potentially very impactful.

“If it was just something that was unique to athletics, it would be different, but universities are giving back board and room charges, and they’re refunding tuition and they’re doing things, canceling summer school and doing things that have previously generated cash flow. They’re not able to do anything really to help the athletics programs very much.”

Saban said he hopes dollars don’t overtake common sense and expert advice when it comes to returning to action.

“These are very challenging times,” Saban said. “We’ve never had to deal with anything like this before at least in my lifetime, and there is a global effort to slow the spread of this virus and all of us have to be responsible in the decisions that we make based on what our responsibility is to do just that.”