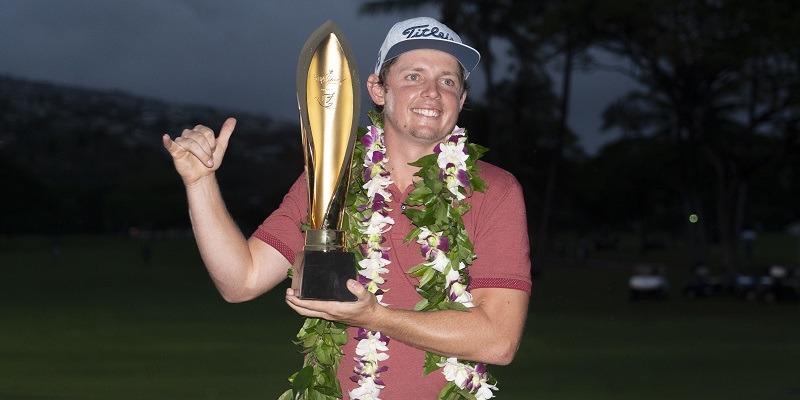 Australia’s Cameron Smith took advantage of Brendan Steele’s late struggles with a clutch birdie at No. 18 and then prevailed in a playoff Sunday for his first individual PGA victory at the Sony Open in Honolulu, Hawaii.

Smith got up-and-down from the sand at 18, sinking a nine-foot putt to force the playoff. His tee shot at No. 10 on the first playoff hole sailed right into the trees, but he recovered with a fantastic low approach to run his ball within 15 feet of the pin.

Steele, who squandered a two-stroke lead with two holes to play in regulation, hit his drive on the playoff hole perfectly down the middle, but his approach from 87 yards sailed long.

He was unable to get up-and-down for par, allowing Smith to two-putt to victory. It was the 26-year-old’s second win on tour after claiming the Zurich Classic of New Orleans with teammate Jonas Blixt of Sweden in May 2017.

“Just had to hang in there,” Smith said afterward on the Golf Channel broadcast. “No one was playing good golf today, it seemed like. … Just hung in there, and what do you know?”

Smith, who donated money for birdies and eagles during the tournament to his native Australia for wildfire relief, made four birdies and two bogeys in rainy, windy conditions Sunday, shooting 2-under 68 to get to 11-under 269 for the tournament.

Steele opened the day with a 3-shot lead but managed only two birdies and three bogeys, including two in the final six holes, to shoot 1 over. He missed a 7-foot par putt at No. 17, then — after a long wait before his shot — hit his second shot at the par-5 18th way left. After a free drop near the stadium seating, he chipped to within 30 feet of the pin and two-putted for par, leading to the playoff.

“I’m just a California kid who doesn’t like rain,” said Steele, who didn’t make a putt longer than six feet during the round. “I was just trying to grind, and it just wasn’t good enough.”

Webb Simpson shot 3 under to finish alone in third at 10 under.

Northern Ireland’s Graeme McDowell equaled the low round of the week with a 64 to tie Ryan Palmer (68) and Kevin Kisner (69) for fourth. Lanto Griffin also shot 64 to finish tied with Ted Potter Jr. for seventh at 8 under.