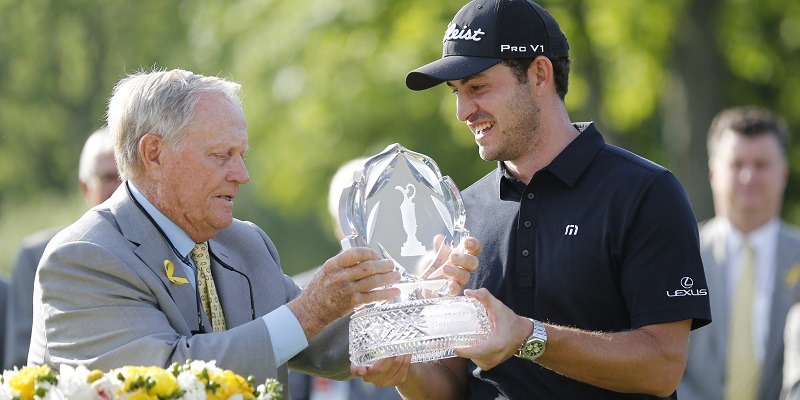 Patrick Cantlay walked off the 18th green at Muirfield Village Golf Club and uttered two triumphant words to Memorial Tournament host Jack Nicklaus: “I finished.”
Cantlay didn’t merely finish Sunday in Dublin, Ohio. He fired the best closing round in tournament history, shooting an 8-under-par 64 to finish at 19-under 269 and capturing his second career PGA title by two shots.

Australia’s Adam Scott shot 68 to finish second at 17 under, while Germany’s Martin Kaymer, who started the day as leader, faltered to a final-round 72 and finished in third place at 16 under.
“Being on this golf course, a golf course I really like, and in front of Jack, making that putt on the last hole … I can’t tell you how good that feels,” Cantlay told CBS Sports after his round.
Cantlay’s round featured eight birdies, including three straight on Nos. 7-9. He finished with an up-and-down par from the greenside bunker on 18 to avoid any bogeys on the day.
“It just definitely validates my confidence that I can play with the best players in the world and beating a field like this on a big golf course like this, this is very similar to a major championship setup with the rough and the big slopey fast greens, it does a lot for my confidence. Especially holing a putt like that on the last hole, knowing that I needed it. That’s good to put in the memory bank.”
The 27-year-old California native had hinted after his round Saturday that Nicklaus had given him some advice about how to close out golf tournaments. On Sunday he shared the secret.
“He said just to relax and have fun, and look around and see all the people having fun and try and smile and just have a good time with it. That’s why you’re there and I definitely felt like that today. I felt at ease,” said Cantlay, who is projected to move up to sixth place in the FedEx Cup standings.
Cantlay, who turned pro in 2012, met Nicklaus during his short but standout career at UCLA where he earned the 2011 Nicklaus Award for player of the year as a freshman.
He broke through for his first PGA Tour win last season, capturing the Shriners Hospitals for Children Open, and posted six other top 10s. So far this season, Cantlay already has another seven top-10 finishes including a tie for third at the PGA Championship and runner-up finish in Las Vegas while defending his title at the Shriners event.

“It’s been great and very special for me to get close to Mr. Nicklaus. We’ve had a lot of interesting and really good conversations over the last couple years,” said Cantlay. “We’ve had some lunches and talked about different golf courses and different mindset situations so it’s all been great, and I can’t (thank him) enough.”
It was a balanced day for the 38-year-old Scott, a 14-time PGA Tour winner. He countered bogeys at Nos. 3 and 10 with six birdies, including a stretch of three straight on Nos. 14-16.
Scott told The Golf Channel that he was “kind of” satisfied with his play, but one thing was still missing: “I’m not winning. I’m playing good a lot, and that’s the positive thing, but I want to win. … Played well coming in, which I was very satisfied about, but it was too late.
“I think it’s coming. I’m determined to keep pushing now. I felt like my game stepped up another level from the PGA (Championship) so it’s moving in the right direction. I’m excited about what’s coming up in the next couple of weeks and the next couple months.”
It was a disappointing day for Kaymer, who is searching for his first PGA Tour win in five years. He started the day with a two-shot lead over Scott and stayed steady atop the leaderboard through 11 holes, posting four birdies and one bogey. He was tied with Cantlay at 17 under, but back-to-back bogeys at 12 and 13 at the same time Cantlay was making birdie at 14 resulted in a two-shot swing that put Cantlay ahead for good.
“I made a few more putts the first three rounds,” Kaymer told The Golf Channel when asked about the difference between Sunday and Rounds 1-3. “Today the putter was OK, but … in situations like this, it’s hard to make bogeys, you know? Obviously, Patrick was playing good golf. There was no room for mistakes, and I made a couple mistakes … That was the biggest difference, really.”
Five-time Memorial Tournament champion Tiger Woods roared into a tie for ninth place thanks to a final-round 67. He carded seven birdies over his first 12 holes but backed up two shots over his finishing holes, making bogeys at 14 and 18.
“I played really well today. It was fun. I hit the ball so crisp and so solid and made some nice putts on the front nine and had things rolling for a little bit,” Woods said.
“I wanted to have something positive going into the (U.S.) Open, and kinda snuck up there into a nice little top 10 possibly here, so it was good. I was never going win the tournament from where I was at, and I wanted to get to double digits (under par) today and I did — I just didn’t stay there.”
Rounding out the top five were Kevin Streelman (66, 13 under) and Marc Leishman (69, 12 under). Defending champion Bryson DeChambeau shot 66 on Sunday to finish tied for 22nd at 5 under.
–Field Level Media (@FieldLevelMedia)