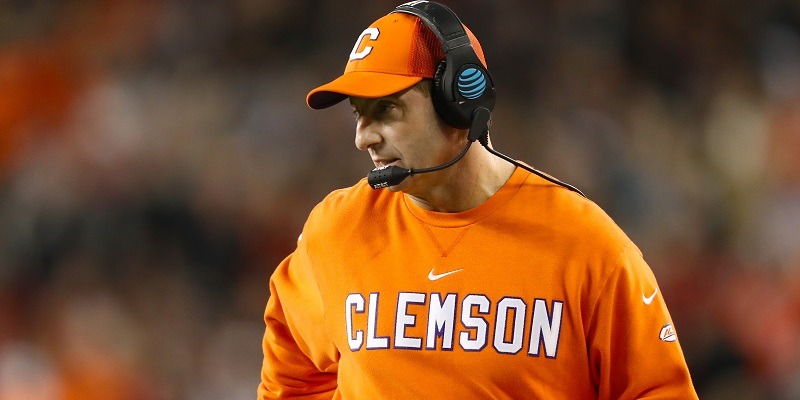 So confident is Swinney that his team’s current T-I-G-E-R-S acronym is the uber-positive spin of “This Is Going To End Real Soon.”

Swinney said he anticipates football players reporting to fall camp in August as scheduled. The Tigers are scheduled to begin the season Sept. 3 in Atlanta against Georgia Tech.

“My preference is let’s get to work and go play,” Swinney told ESPN. “That’s the best-case scenario, and I think that’s what’s going to happen. I don’t have any doubt. I have zero doubt that we’re going to be playing and the stands are going to be packed.”

Sports stopped almost collectively on March 12. That’s the day after the NBA suspended its season and the day the NHL followed suit. The NCAA Tournament was canceled that day, too, and all college spring sports seasons since have been called off.

“That’s just my mindset. I’ve got one plan, and that’s to get the Tigers ready to play in late August, early September,” Swinney said. “I’ll leave it to the smart people to figure out the doomsday scenarios. We’ve got one scenario, and that’s to run down that hill and kick it off in the valley.”

Swinney previously posted a video to Clemson players and staff on the athletic department website advising all to focus on safety.

“Safety is first and foremost. All you can do is let the powers that be make the decisions, and you go with it,” he said in the video last month.

The latest message is also a shift in tenor from the March video in which Swinney, who is devoutly religious, admitted uncertainty.

“I’m very hopeful that we will be back at it, rolling, but who knows,” he said. “There’s certainly concern, but instead of being concerned, I’m just being faithful.”