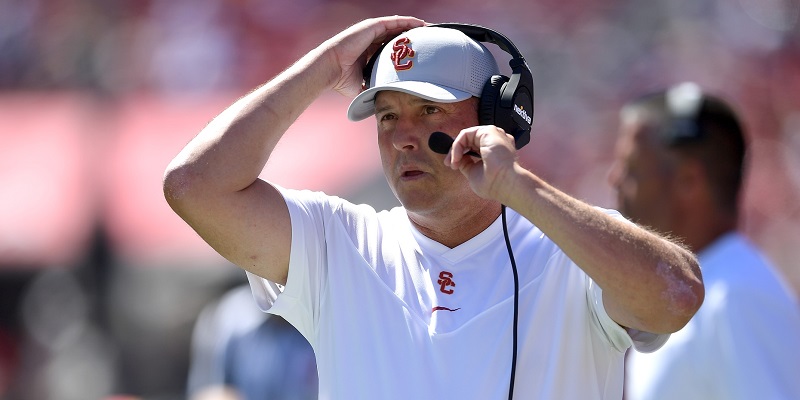 The dismissal comes two days after the then-No. 14 Trojans were pummeled 42-28 by Stanford.

“This afternoon I informed Clay Helton of my decision to make a change in the leadership of our football program,” athletic director Mike Bohn said in a statement. “Clay is one of the finest human beings I have met in this industry, and he has been a tremendous role model and mentor to our young men.”

However, the Trojans are just 19-14 since the end of the 2017 season and Saturday’s loss signaled to Bohn, who became athletic director 22 months ago, that action was needed.

“As I committed to upon my arrival at USC, during the past two offseasons we provided every resource necessary for our football program to compete for championships,” Bohn said. “The added resources significantly increased expectations for our team’s performance, and it is already evident that, despite the enhancements, those expectations would not be met without a change in leadership.”

Former USC stars Keyshawn Johnson and Matt Leinart were among the ex-players expressing their anger after the loss to Stanford.

Bohn asserted he will seek a coach who can turn the program back to a national championship contender. The Trojans have won 11 national titles with the most recent being in 2004.

“Over the next few months, we will conduct a national search for our new head coach,” Bohn said. “We will actively and patiently pursue a coach who will deliver on the championship aspirations and expectations we all share for our football program.”

Williams, who was coaching cornerbacks, is in his second season on the USC staff. He has never been a head coach.

“Donte is an experienced and well-respected coach who is renowned for his ability to develop relationships with student-athletes and I appreciate his willingness to take on this challenge,” Bohn said. “With 10 games left, we still have control of our own destiny in the Pac-12 conference.”

USC has finally fired Clay Helton. They should have done it in 2019 after Carol Folt was hired as the new president and Mike Bohn was hired as the new AD. It’s embarrassing that it took this long and they made the move two games into this season but at least it’s over. Finally. https://t.co/G7QVyx5N0k