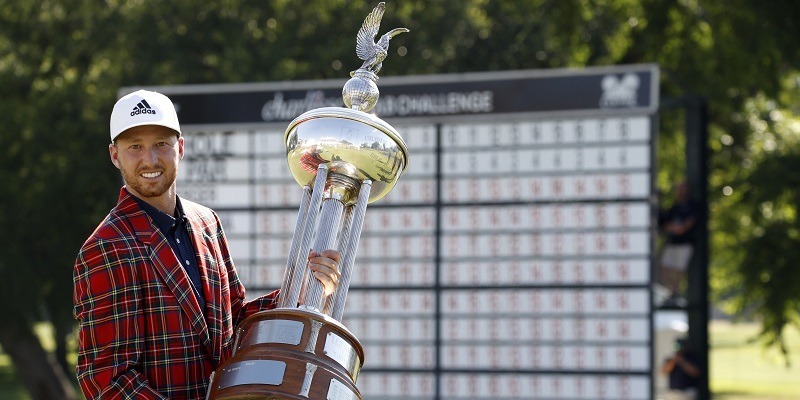 Daniel Berger birdied the 72nd hole to make the playoff and then prevailed when Collin Morikawa missed a short putt to claim victory Sunday at the Charles Schwab Challenge in Fort Worth, Texas, in golf’s return to action.

Both golfers shot 15-under 265 at Colonial Country Club. Berger shot 66 on Sunday to record his third career victory. Morikawa carded a 67.

Morikawa was bidding to force a second playoff hole when his par putt from 3 feet on the 17th hole lipped off the right side of the cup. The miss gave a momentarily surprised Berger the victory.

“It’s just a range of emotion. I’ve grinded real hard just to be in this position and I’m just so thankful that all the hard work paid off,” the 27-year-old Berger said on the CBS broadcast.

“I had full control,” Morikawa said afterward. “It’s going to be a little bittersweet. I know I’m going to have to look back at it before next week and see all the positives, but I’m also going to have to nit-pick what I did wrong. This one bites a little harder.”

The tournament was the first PGA Tour event since mid-March due to the coronavirus pandemic. Fans weren’t in attendance.

Kokrak shot a 6-under 64 and carded eight birdies and two bogeys.

It looked like Morikawa and Schauffele were the more likely playoff combatants but Schauffele suffered bogeys on 15 and 17. His 13-foot putt on 17 was especially painful as the ball rolled around the cup and tumbled out.

“It was kind of hectic, honestly, the finish,” Schauffele said on CBS. “The putt I had on the last hole was right in the heart. I just left it a little bit short. I felt like it summed up my week.”

While Schauffele wobbled, Berger hung around and moved into the playoff when he knocked down a 10-foot birdie putt on 18.

Morikawa’s chance to win on the 72nd hole came up empty as his birdie putt from less than 6 feet fell 14 inches short.

“I hit a really good putt on 18,” the 23-year-old Morikawa said. “Yeah, I’m going to have my head down after that because it was a putt pretty much to win it, but everything from there on was a good putt. So as long as I’m starting it on line, I’m confident.”

A short time later, Berger was the winner. All three of his career victories have come in June.

Berger shot 67 or lower in all four rounds on the Colonial course and has a stretch of 28 consecutive par-or-better rounds.

“I’m glad no one talks about it, because it’s definitely harder to go out there and win when you’re worried about it,” Berger said of the impressive streak. “There was so many times today where I could have given it up or let the pressure get to me, but I hung in there and I played practically some of the best golf I’ve played the last six years (over) the last five holes today.”

Top-ranked Rory McIlroy of Northern Ireland shot a final-round 74 and finished in a tie for 32nd at six-under 274. McIlroy badly struggled on the front nine with four bogeys and a double-bogey.

The next event is the RBC Heritage at Hilton Head, S.C. Play begins Thursday.