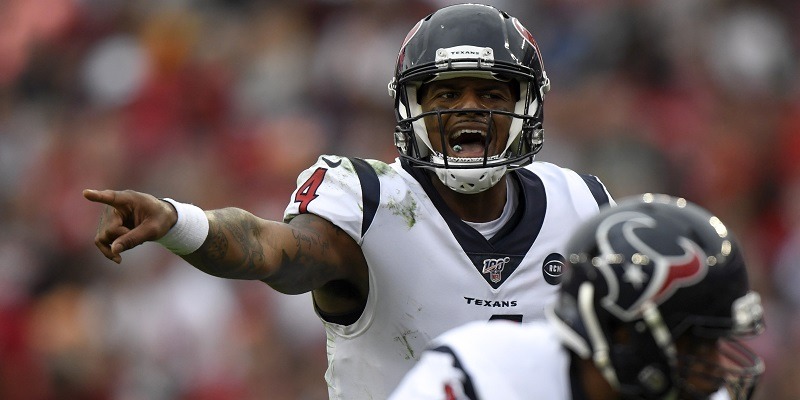 Deshaun Watson in a Patriots uniform?

With rumors swirling that the Houston Texans’ franchise quarterback might request a trade this offseason, New England has emerged as one of several potential destinations.

Watson is coming off a career-best 4,823 passing yards while being named to his third Pro Bowl. But that came in a 4-12 season that saw coach Bill O’Brien get fired.

“We just need a whole culture shift,” Watson said Monday. “We just need new energy. We just need discipline. We need structure. We need a leader so we can follow that leader as players. That’s what we need.”

Those comments sparked speculation that Watson may want out of town. Additionally, an ESPN report Thursday added that Watson was upset the Texans did not inform him before hiring former New England Patriots executive Nick Caserio and also that they did not consider any of the candidates that he endorsed to ownership.

If he is traded before Sept. 1, SportsBetting.com is offering the Patriots as the 2-1 favorite to land Watson.

Watson signed $177.54 extension in September that put him under contract through 2025, and the Houston Chronicle’s John McClain reported Thursday that, “under no circumstances will the Texans trade Watson.”

However, Houston closed the season with five consecutive losses under interim coach Romeo Crennel. The team is also facing a potential rebuild, and longtime veterans such as defensive end J.J. Watt could be on the move this offseason.

The Patriots have a glaring need for a new starting quarterback after a one-year failed experiment with former NFL MVP Cam Newton.

–Chicago reached the playoffs, but only after returning to Mitchell Trubisky at quarterback after the former No. 2 overall pick was benched in favor of veteran Nick Folks.

–New England is widely expected to move on from pending Cam Newton following a failed one-year experiment. Despite Newton’s struggles this season, coach Bill Belichick steadfastly refused to give Jarrett Stidham a crack at the job.

–San Francisco saw Jimmy Garoppolo finish another season on injured reserve. In four seasons with the 49ers, he has played more than six games only once and his future in San Francisco is very much in question.

—Drew Lock said Monday that “without a doubt” he feels like he can be Denver’s quarterback of the future. But that comes after finishing his second season tied for the NFL lead with 15 interceptions while his completion percentage dropped to 57.3 from 64.1.

–Detroit’s Matthew Stafford has two years remaining on his $135 million deal. With a new coach and a new general manager coming in, Stafford acknowledged Monday that “there’s a lot to discuss,” without specifically addressing his future with the Lions. Will he demand a trade from the team his has led since 2009?

–The Washington Football Team won the NFC East with a 7-9 record. The return of Alex Smith was one of the season’s feel-good stories, especially juxtaposed to the release of 2019 first-round pick Dwayne Haskins, but the 36-year-old is certainly not the long-term answer in Washington.

—Ben Roethlisberger has said he plans to return for an 18th season in Pittsburgh. The 38-year-old struggled at times late this season and Mason Rudolph has not shown that he’s a legitimate heir to Roethlisberger’s throne in the Steel City.