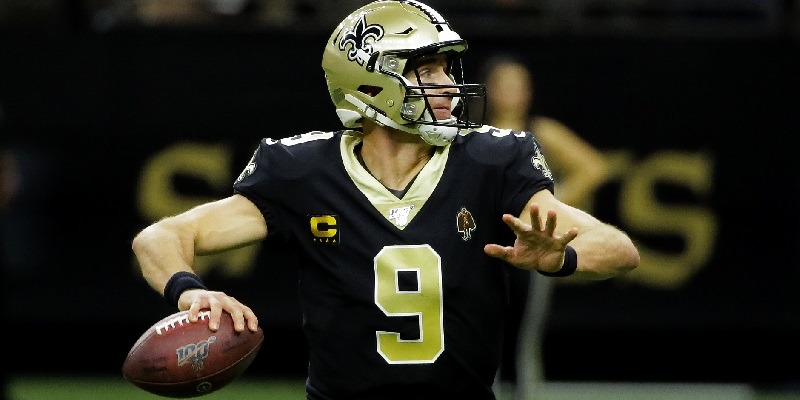 With quarterback Drew Brees expected to miss an extended period of time with broken ribs and a collapsed lung, the New Olreans Saints’ odds to win the NFC South took a direct hit on Monday.

The 7-2 Saints lead the NFC South by a half-game over the Tampa Bay Buccaneers (7-3), and already swept the season series to own a potential tiebreaker.

The NFC South is a two-horse division with the Carolina Panthers falling to 3-7 and the Atlanta Falcons sitting at 3-6.

Before the severity of Brees’ injuries was known, the Saints’ were -275 by PointsBet to win the NFC South ahead of the Bucs (+200). After the news broke Monday, New Orleans’ division-winning odds lengthened to -210 while Tampa Bay’s shortened to +160.

The Saints moved to the head of the NFC pack at +750 to win Super Bowl LV, behind only the Kansas City Chiefs (+350) and Pittsburgh Steelers (+600). The Baltimore Ravens and Seattle Seahawks both lost on Sunday, lowering their odds to +900 and +1000, respectfully.

PointsBet told Field Level Media that there was enough Super Bowl handle at the sportsbook on several other teams that the Brees injury news did not impact New Orleans’ title odds yet.

Brees, 41, is expected to be sidelined at least three weeks with multiple rib fractures on both sides of his chest and a collapsed lung, according to ESPN. He reportedly first suffered three broken ribs on his right side in the Saints’ Week 9 win over the Bucs.

The Saints play the Chiefs on Dec. 20 and have a Christmas Day game against the Minnesota Vikings. The Week 17 regular-season finale for New Orleans is Jan. 3 at Carolina.


Next Saint up: Jameis Winston or Taysom Hill?

Brees finished 8-of-13 passing for 76 yards and a touchdown on Sunday. He has completed a league-best 73.5 percent of his passes for 2,196 yards with 18 touchdowns against three interceptions this season.

New Orleans plays host to the Falcons this Sunday, with Jameis Winston and Taysom Hill candidates to start in Brees’ place.

Winston completed 6 of 10 passes for 63 yards with no touchdowns or interceptions against the San Francisco 49ers in Week 10. It was the former No. 1 overall draft pick’s second appearance with the Saints since signing a one-year deal in the offseason.