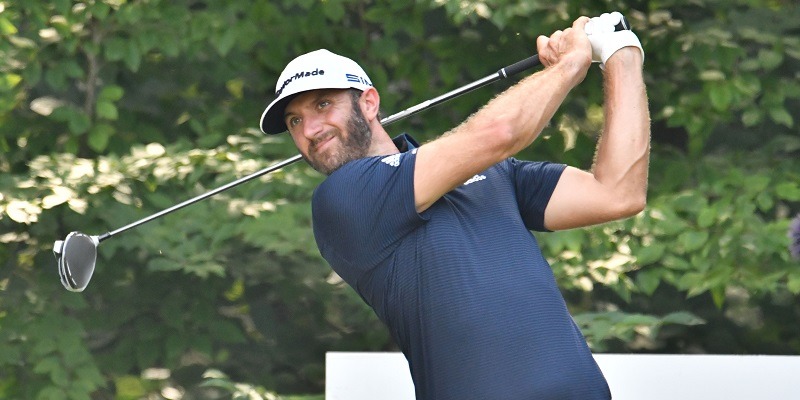 Dustin Johnson crushed the competition, and the course, on his way to running away with the title at The Northern Trust on Sunday.

Johnson capped an unbelievable weekend with a bogey-free, 8-under-par 63 in the final round at TPC Boston in Norton, Mass. Johnson finished 30-under for the tournament with a total score of 254. He finished a whopping 11 shots ahead of runner-up Harris English (19-under).

Johnson’s margin of victory was the largest in a Tour even since 2006. It was his fifth win in a FedEx Cup playoffs event — tied with Rory McIlory for most.

Both scoring marks were also tournament and course records — in the first leg of the FedEx Cup playoffs. The performance also moved Johnson to No. 1 in both the PGA Tour and FedEx Cup rankings.

Johnson was last rated as the No. 1 player in the world May 2019, when he was unseated by Brooks Koepka.

“It’s something that I’m very proud of, to be No. 1 in the world, and I’d like to stay there for a little while,” Johnson said. “It’s been jumping around a bunch here the last few months, but the last time I was No. 1, I think I stayed there for quite some time, and that’s another goal of mine — to see how long I can stay at No. 1.”

English finished with a two-under 69 and 19-under overall to come in second.

Daniel Berger carded a 4-under 67 on Sunday and fished third at 18-under par.

Kevin Kisner, who shot a 5-under 66 on Sunday, and Scottie Scheffler, who upstaged Johnson with a 59 on Friday, tied for fourth at 17-under.

Kisner grew up playing junior golf with Johnson in South Carolina. He wasn’t surprised at the way Johnson handled the course.

“He can absolutely dismantle a golf course when he’s on,” Kisner said. “I’ve been watching it for 25 years. I’m pretty accustomed to it. When he’s on, I just step to the side and try to add on to my bank account.”

Johnson played the final two holes as darkness creeped in. A storm delay broke up the final round, but even that didn’t bother him. Johnson, who had more eagles (five) than bogeys (three) during the week, had just two holes left when the horn sounded, but returned to collect a par and a birdie after the weather cleared.

Soon-to-be-former World No. 1 Jon Rahm of Spain fired a 6-under 65 on Sunday and finished tied for fifth with Webb Simpson at 16-under.

The top 70 players in the FedEx Cup standings after The Northern Trust will move on to the second leg, the BWM Championship next week.