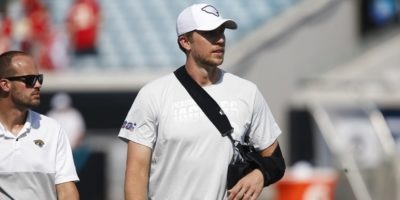 Jacksonville Jaguars starting quarterback Nick Foles broke his left collarbone in Sunday’s loss against the Kansas City Chiefs and will need surgery, he confirmed to reporters after the game.

Surgery is scheduled for Monday.

Foles, making his starting debut for Jacksonville after arriving from Philadelphia, said the injury was worse than the broken collarbone he sustained with the Eagles in 2014. That injury happened in early November of that season; he did not have surgery and missed the final two months of the year.

Foles was hurt on a 35-yard touchdown pass to DJ Chark with 5:23 remaining in the first quarter. As he released the throw, he was hit by Chiefs defensive tackle Chris Jones, who landed on Foles and drove his left shoulder into the ground.

The signal-caller was taken to the locker room for X-rays, and he later returned to the team’s sideline in street clothes with his left arm in a padded sling.

Foles was 5-of-8 passing for 75 yards before departing.