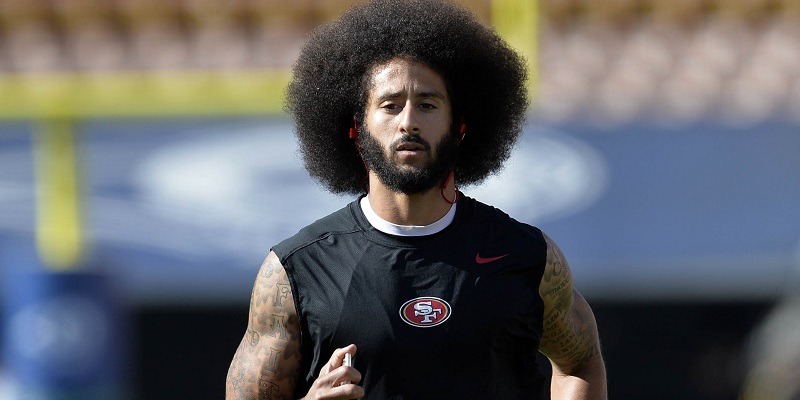 Colin Kaepernick and Eric Reid will share less than $10 million, minus attorneys’ fees, in the settlement of their collusion case against the NFL, according to the Wall Street Journal.
The settlement between the league and the players was announced last month, but financial terms were not announced due to a confidentiality agreement.
The Journal said Thursday it was unknown how Kaepernick and Reid would split the settlement.

Kaepernick, the former quarterback of the San Francisco 49ers, opted out of his contract in March 2017 to pursue free agency. But when he found no takers, he filed the grievance in the league seven months later.
In the 2016 preseason, Kaepernick began sitting on the bench during the playing of the national anthem in protest for what he saw as racial injustice against minorities, then decided to kneel instead after speaking with an Army veteran.
He hasn’t found a new job, and he contended in his grievance that the 32 NFL teams “colluded to deprive Mr. Kaepernick of employment rights in retaliation for Mr. Kaepernick’s leadership and advocacy for equality and social justice and his bringing awareness to peculiar institutions still undermining racial equality in the United States.”
A number of owners, executives, coaches and other figures had been deposed as part of the grievance, and a motion by the NFL to have the grievance dismissed was denied in August.
Defensive back Reid, who was the first player to join Kaepernick in 2016 with the 49ers by kneeling during the anthem, filed his own collusion case against the NFL in May 2018. The two grievances were combined into a joint case, but it’s unclear when that occurred.
Reid became a free agent in March 2018 and remained unsigned until mid-September, when the Carolina Panthers brought him in after an injury to safety Da’Norris Searcy. With his one-year deal expiring after the season, Reid signed a three-year extension for a reported $22 million with Carolina this offseason.