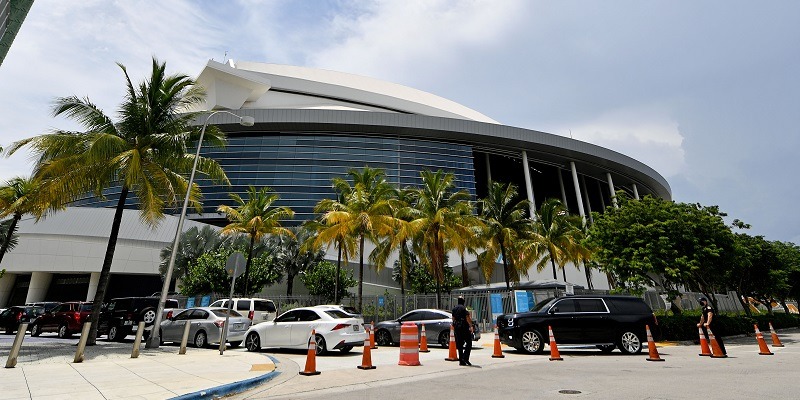 The Miami Marlins will not play again until at least Monday, as Major League Baseball announced Tuesday that all of the team’s games through Sunday have been postponed following a coronavirus outbreak of at least 17 reported positive tests.

Additionally, the Philadelphia Phillies will not play until at least Friday, “out of an abundance of caution” after they played a home series against Miami over the weekend.

The Marlins’ two-game home series Monday and Tuesday against Baltimore had already been canceled. Also canceled are two games at Baltimore on Wednesday and Thursday, and a three-game home games against Washington running Friday-Sunday.

“We continue to take this entire situation very seriously,” CEO Derek Jeter said in a statement. “All of our players, coaches and staff are, understandably, having a difficult time enduring this experience. After receiving additional test results on our Major League team this morning, we reached out to the Commissioner’s Office with concern for the health and safety of our team as well as our opponents.

“We have moved to a daily testing schedule while we isolate and quarantine appropriately, along with enacting additional preventative procedures with our traveling party. We look forward to safely returning to Miami where we conducted a successful and healthy Spring 2.0 before departing on the road and experiencing challenges. For the time being, we will remain in Philadelphia and gather information in order to make informed decisions and prepare for our return to action next week.”

The Phillies’ four-game home-and-home series with the New York Yankees is canceled. Instead, the Yankees will head to Baltimore for games with the Orioles on Wednesday and Thursday, to allow for schedule flexibility later in the year. Further schedule changes are expected to be announced in the future.

The league announced that in more than 6,400 tests since Friday, there have been no new positives of on-field personnel from any team other than the Marlins.

According to MLB Network, no Phillies players have tested positive for the virus, but one staffer has. Tests are continuing Tuesday.

Earlier Tuesday, Dr. Anthony Fauci said he feared the growing outbreak of the virus within the Marlins could threaten the 2020 baseball season.

Fauci said on “Good Morning America” that Major League Baseball still has time to curb the spread of the pandemic.

“This could put it in danger,” said Fauci, the director of the National Institute of Allergy and Infectious Diseases. “I don’t believe they need to stop, but we just need to follow this and see what happens with other teams on a day-by-day basis.”

The Marlins completed a three-game series in Philadelphia on Sunday but opted not to fly back to Miami due to their rising number of cases of COVID-19 confirmed by positive tests. The team’s home opener against the Baltimore Orioles was quickly canceled, with case numbers growing each day.

“Major League Baseball — the players, the owners, the managers — have put a lot of effort into getting together and putting protocols that we feel would work,” Fauci said. “It’s very unfortunate what happened with the Miami (Marlins).”

Commissioner Rob Manfred solely has the power to postpone the season. Individual teams are given the leeway to postpone or cancel games as the Marlins and Phillies did on Monday, prior to the league’s postponements announced Tuesday.

“A team losing a number of players that rendered it completely noncompetitive would be an issue that we would have to address and have to think about making a change,” Manfred said. “Whether that was shutting down a part of the season, the whole season, that depends on the circumstances. Same thing with respect to leaguewide. You get to a certain point leaguewide where it does become a health threat, and we certainly would shut down at that point.”

Washington Nationals manager Dave Martinez, who was sidelined during the 2019 season with a heart issue, said Monday night he was “scared” by the uncertainty surrounding the coronavirus pandemic, before the three-game series at Miami this weekend was canceled.

Martinez said his level of concern went from “an 8 to a 12” after hearing of the outbreak with the Marlins, adding, “I am scared, I really am.”

The Nationals voted not to travel to Miami this weekend, according to multiple reports, prior to the league’s announcement.