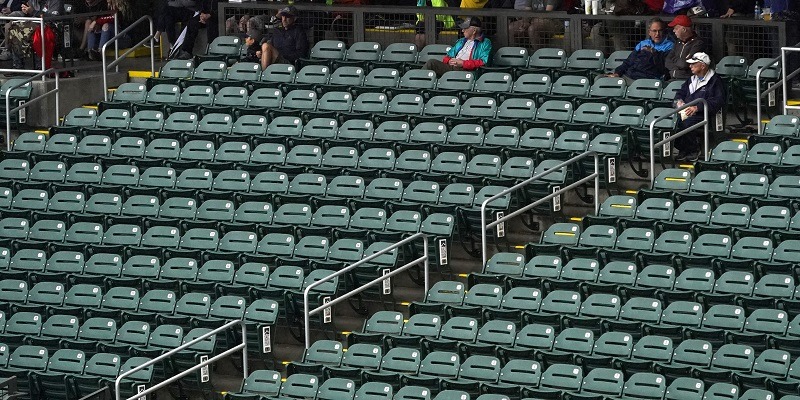 Major League Baseball is exploring the possibility of restarting its season with games behind closed doors at facilities in the Arizona area, multiple media outlets reported late Monday night.

MLB released a statement Tuesday morning saying no decisions have been made.

“MLB has been actively considering numerous contingency plans that would allow play to commence once the public health situation has improved to the point that it is safe to do so,” the statement read. “While we have discussed the idea of staging games at one location as one potential option, we have not settled on that option or developed a detailed plan. While we continue to interact regularly with governmental and public health officials, we have not sought or received approval of any plan from federal, state and local officials, or the Players Association. The health and safety of our employees, players, fans and the public at large are paramount, and we are not ready at this time to endorse any particular format for staging games in light of the rapidly changing public health situation caused by the coronavirus.”

MLB hopes the first games could occur as soon as May, according to ESPN’s Jeff Passan, who added that sources indicated June might be “more realistic.”

There are going to be players who oppose the Arizona plan — who prefer to wait and see if alternative solutions for playing present themselves. And it’s easy to understand why: separating from your family for potentially months at a time is an enormous ask of anyone. pic.twitter.com/0DQPTvWS5B

MLB, like all other major North American sports leagues, is shut down due to the coronavirus pandemic. On March 12, MLB halted spring training and pushed back its scheduled Opening Day from March 26 to mid-April. On March 16, the start of the season was pushed back indefinitely.

Since then, team owners and the players union have discussed plans to complete as much of the 162-game schedule as possible while still following the advice of medical experts regarding the course of the COVID-19 outbreak.

The proposed Arizona plan would see games played at the Arizona Diamondbacks’ home, Chase Field in Phoenix, as well as the 10 spring training stadiums within 25 miles of Phoenix.

According to ESPN, the teams and “essential personnel” would be housed in area hotels, traveling only to and from the stadiums for games. The report stated, “Federal officials at the Centers for Disease Control and Prevention as well as the National Institute of Health have been supportive of a plan that would adhere to strict isolation, promote social distancing and allow MLB to become the first professional sport to return.”

The willingness of the union to agree to have the players quarantined away from their families for an indefinite stretch is one of the many potential stumbling blocks to the proposal. Another, according to ESPN, is concern about the health of managers, coaches and other older personnel whose risk of problems related to COVID-19 is greater is than that of the players.

Maneuvering to arrange housing, security and transportation, among other matters, amid “stay at home” orders such as the one enacted in Arizona as of March 31 further complicate the potential for the proposal to be enacted.

The Arizona Republic reported that the Phoenix-area plan was just one option MLB is exploring, with a source telling the newspaper, “They’re talking about everything. There’s nothing they can rule out.”