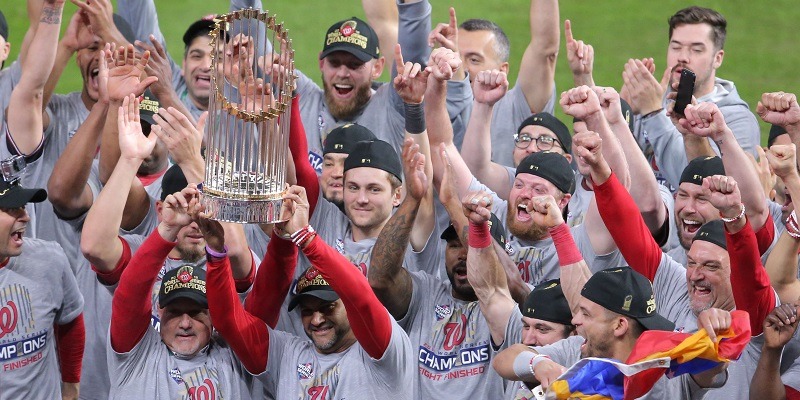 HOUSTON — Howie Kendrick hit an opposite-field, two-run home run in the seventh inning, and the Washington Nationals completed an upset of the Houston Astros, claiming the decisive Game 7 with a 6-2 victory on Wednesday to secure the franchise’s first championship.

It’s the city of Washington’s second World Series title, after the Senators won it all in 1924. The Montreal Expos, who debuted in 1969, moved to Washington and became the Nationals starting in 2005.

Kendrick, whose grand slam in the 10th inning of the National League Division Series felled the 106-win Los Angeles Dodgers, again struck the decisive blow for the Nationals, who became the first team to win four road games in the Fall Classic. Kendrick slapped an 0-1 cutter from Astros right-hander Will Harris (0-1) off the right field foul pole to erase a 2-1 deficit.

Left-hander Patrick Corbin (1-1) made that lead stand by completing a three-inning stint of scoreless relief. He replaced starter Max Scherzer to open the sixth and induced an inning-ending double play from Jose Altuve in that frame to keep the deficit at 2-0.

Corbin stranded Yuli Gurriel in the seventh after Washington pulled ahead and set the Astros down in order in the eighth before yielding the mound to Daniel Hudson. Corbin allowed two hits and fanned three.

Juan Soto stroked an RBI single in the eighth to make it 4-2. Washington added two runs of insurance in the ninth, ensuring victories for the road team in all seven games of the series, a first in any major U.S. sport.

Stephen Strasburg, who was the winning pitcher in Games 2 and 6, was selected the World Series MVP.

“We stuck together, I know that, when we had nothing else to lose,” Nationals third baseman Anthony Rendon, a Houston native, said postgame on FOX. “When people had written us off, we were facing elimination games that people thought we shouldn’t have been there in the first place. So we just kept on fighting and happened to come out on top.”

Astros right-hander Zack Greinke pitched exceptionally Wednesday before departing after 6 1/3 innings. Greinke faced the minimum through four innings and had just 59 pitches on his ledger through five scoreless frames. He also initiated a double play in the second inning and recorded four additional assists.

However, Rendon started the comeback with his one-out homer in the seventh off Greinke, pulling Washington within 2-1. A Soto walk prompted the Astros to bring in Harris, and Kendrick landed the staggering blow on the reliever’s second pitch.

Greinke was charged with two runs on two hits and two walks with three strikeouts.

As was the case for most of their losses, the Astros were done in by failures with runners in scoring position.

Houston struck first against Scherzer when Gurriel homered leading off the second inning. From that point, the Astros went hitless in six plate appearances with runners in scoring position before Carlos Correa lined a two-out, two-strike single past Rendon to score Gurriel in the fifth.

Scherzer, who was scratched from an expected Game 5 start due to neck and back spasms, allowed two runs on seven hits and four walks in five innings, striking out three.