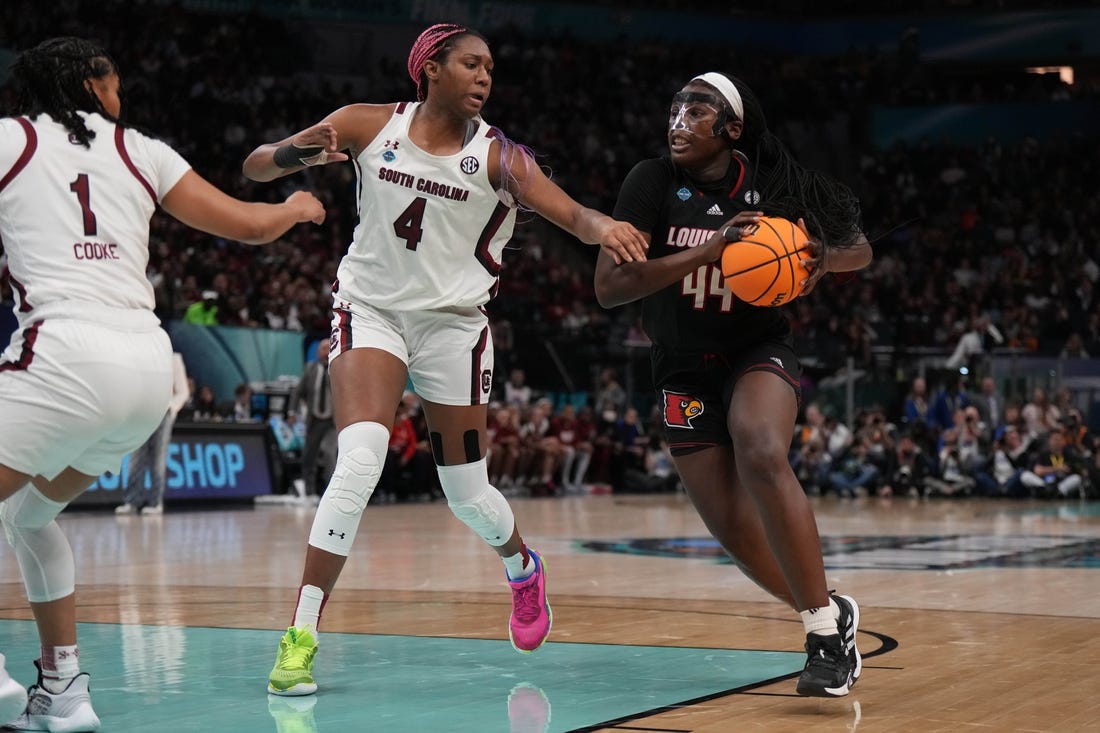 MINNEAPOLIS — Aliyah Boston had 23 points and 18 rebounds to pace South Carolina to a 72-59 victory over Louisville on Friday night in the first semifinal at the women’s Final Four.

South Carolina (34-2), the top overall seed in the tournament, will face UConn (30-5), winner of 11 national titles, in the title game Sunday night at Target Center. UConn defeated Stanford 63-58 in the second semifinal on Friday.

Boston, the Naismith National Player of the Year and Defensive Player of the Year, hit 8 of 12 shots and 6 of 7 free throws. The 6-5 junior punctuated her performance with her only 3-pointer, which made it 68-54 with 3:12 left.

“She’s 6-foot-5. That impacts it. She has good hands. She moves well. She finishes on both sides of the floor. She goes after the ball. She’s good. She’s really good. It doesn’t take me to tell you what she’s good at,” Louisville coach Jeff Walz said of Boston.

Brea Beal added 12 points and Destanni Henderson 11 for the Gamecocks, who lost to Stanford, 66-65, in the national semifinals last season. South Carolina won its only national title in 2017.

Emily Engstler had 18 points and nine rebounds for Louisville (29-5) before fouling out with 4:56 remaining. Hailey Van Lith, who scored at least 20 points in each of the first four tournament games, was held to nine points on 4-of-11 shooting.

South Carolina gained control with runs on each side of the half. The Gamecocks closed the second quarter with a 10-4 run for a 34-28 lead, then opened the third period with a 10-2 spurt. Victaria Saxton hit two free throws to put South Carolina up 44-30.

After going 2 of 9 from beyond the arc in the first two quarters, the Gamecocks hit their first three attempts from deep in the third quarter, pushing the lead to 51-36 on Henderson’s 3-pointer.

“We have to play through her,” South Carolina coach Dawn Staley said of Boston. “It doesn’t mean that she has to shoot the ball, but every time she touches the ball, she draws a crowd. If we’re able to kick it out — that’s probably a time that we need to take those shots, but I thought we just got in the rhythm of shooting outside shots that really didn’t make any sense, and it just threw off our transitional defensive balance. But we corrected it, and when we started going into her, playing inside out, more shots from the outside started falling.”

The Cardinals scored six straight to pull within 54-48, but Boston converted a three-point play with 4.2 seconds left as Engstler picked up her fourth foul.

Boston said that play “was really big just because it gave us momentum, and it also got somebody else in foul trouble, which we could always benefit from.”

Walz said he expected his team would face difficulties if the Gamecocks began to hit their shots.

“You’ve got to give South Carolina credit; we came out of the third quarter and trapped, out of the initial pass, had them scrambling, and I think they go three for three, their first three threes to start the first quarter,” he said.

“I said, ‘If they make 10 threes we’re going to be in trouble.’ They made three out of five in the third quarter, and we’re still right there with a chance.”

South Carolina threatened to pull away early in the second quarter, but Louisville erased a 19-10 deficit with a 12-0 run.

After being outrebounded 9-1 in opening minutes, Louisville battled back to even the rebound count at 19-19 at the half and held a 10-2 advantage in second-chance points.

No. 1 Houston draws its first ranked opponent when No. 8 Alabama visits Saturday. The Cougars (9-0) are coming off a 76-42 win over visiting North Florida on Tuesday, while…

It might be early in the season, but it’s safe to say that both No. 4 Purdue and Nebraska have so far exceeded expectations bestowed upon them just as Big…

No. 17 Illinois looks to ride momentum against Penn State

Titans CB Caleb Farley (back) out for season