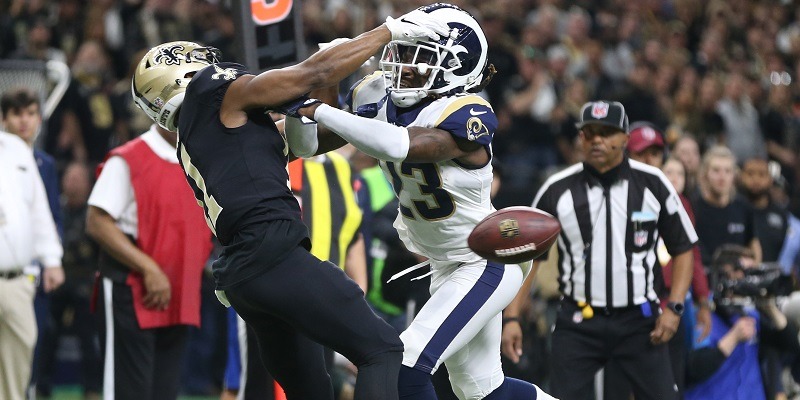 NFL owners voted 31-1 to make offensive and defensive pass interference calls and non-calls reviewable in 2019, the NFL announced Tuesday from the annual league meetings in Phoenix.
According to multiple reports, the Cincinnati Bengals were the only team to vote against the rule.

The new rule, which will be revisited next offseason to determine if it becomes permanent, will allow coaches to challenge any call or non-call of pass interference before the final two minutes of each half, and any such plays to be reviewable by the booth inside of two minutes. Coaches will still be allowed only two challenges per game, or three if the first two are successful.
After getting little support from the owners in meetings Monday, the rule change was pushed over the edge by overwhelming support from coaches, multiple outlets reported. Meetings regarding the rule ran long Monday as coaches made their case for implementing the change, and they continued Tuesday.
New Orleans Saints head coach Sean Payton led the effort, after his team missed out on a likely appearance in Super Bowl LIII when referees failed to make an obvious pass interference call late in the NFC Championship Game against the Los Angeles Rams.
“I think we got it right,” Payton told reporters afterward. “It felt like we had to go around the block twice, and then arrived at the right address.”
Saints owner Gayle Benson, who issued a strong statement after the team’s championship game loss in reference to the officiating, added, “This is what I wanted to happen. That’s why I made my statement. [The missed call] will never happen again.”
“People compromised on long-held views because people wanted to get it right,” commissioner Roger Goodell said in his press conference, held shortly after the new rule was approved.
ESPN’s Adam Schefter reports the new rule would have had a major impact had it been in place earlier, not only the NFC Championship Game but also for Super Bowl LIII.
According to Schefter, the competition committee admitted the new rule would have given the Rams the ball at the 1-yard line with 4:24 remaining as they trailed 10-3 in the Super Bowl, after cornerback Stephon Gilmore subtly hooked wideout Brandin Cooks’ arm on an incompletion in the end zone. No call was made on that play — Cooks still nearly caught the pass, but couldn’t hang on — and Jared Goff was intercepted by Gilmore on the next snap, all but clinching the game for New England.
Meanwhile, the possibility of a “sky judge” — an eighth official looking at camera feeds live to help make obvious decisions without reviews — is not yet dead, according to Steelers owner Art Rooney II. However, there remain a number of logistics to work out on the subject, and it will be revisited later this offseason.

Among other decisions made on rule changes:

–The Kansas City Chiefs’ proposal that would guarantee both teams possession in overtime, regardless of whether the first team to possess the ball scores a touchdown, was tabled until May. The Chiefs lost the AFC Championship Game without possessing the ball in overtime after the Patriots scored a touchdown on the first possession.
–The Denver Broncos’ proposal to allow teams to attempt a fourth-and-15 conversion from their own 35-yard line in lieu of attempting an onside kick — used a maximum of once per game — was rejected, despite seven of eight competition committee members voting in favor of it.
–The definition of plays subject to automatic reviews was expanded. Previously including only plays involving a score or turnover, the category now also includes any score or turnover nullified by penalty or any extra-point or 2-point conversion attempt.
–Changes made to the kickoff in 2018 on a one-year trial were made permanent moving forward.
–All blind-side blocks were made illegal, with the intention of improving player safety after research showed such blocks led to a third of concussions sustained on punts. Previously, players were only allowed to deliver blind-side blocks that avoided the head or neck area.
–After unsportsmanlike conduct penalties occur during a touchdown play, teams are now allowed to choose whether to enforce the penalty on the extra-point try or on the kickoff.
–Field Level Media