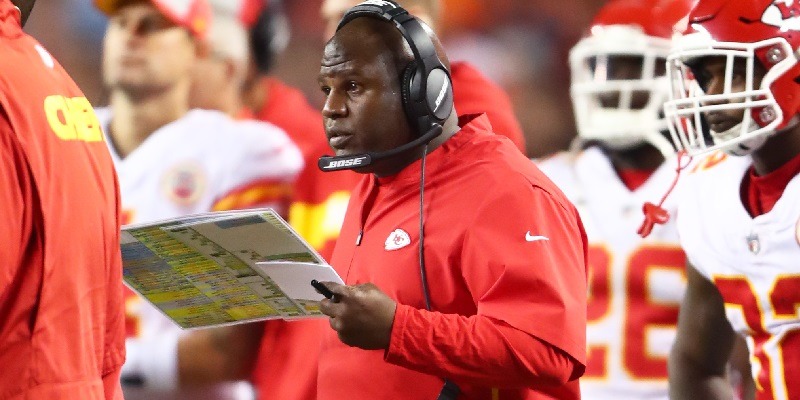 Kansas City Chiefs offensive coordinator Eric Bieniemy has turned down a chance to interview for the head coaching job at Colorado, according to reports.

Mike Klis of Denver-based 9NEWS initially tweeted that Bieniemy told Colorado officials that he no longer was interested in the job. Bieniemy, 50, was believed to be the top target for the Buffaloes.

Chiefs’ OC Eric Bieniemy withdrew his name from any consideration for the Colorado HC job, as @MikeKlis also reported. Too good of a situation in KC to leave now, especially when he will be a prime NFL HC candidate again this season.

Bieniemy, who played four years for the Buffaloes from 1987-90, reportedly never formally interviewed for the position but repeatedly was contacted by his alma mater. The nine-year NFL veteran running back served as Colorado’s offensive coordinator for two seasons prior to joining Andy Reid’s staff as the Chiefs’ running backs coach in 2013.

Before the 2019 season, Bieniemy interviewed with the New York Jets, Miami Dolphins, Cincinnati Bengals and Tampa Bay Buccaneers for their respective head-coaching positions, and he reportedly declined an interview with the Arizona Cardinals. This offseason, he interviewed with the Carolina Panthers, Cleveland Browns and New York Giants, all of which hired other candidates.

The Colorado job came open when Mel Tucker, who led the Buffaloes to a 5-7 record in 2019, left to take the head-coaching position at Michigan State. Alabama offensive coordinator Steve Sarkisian interviewed for the job this week but pulled out of contention on Thursday.