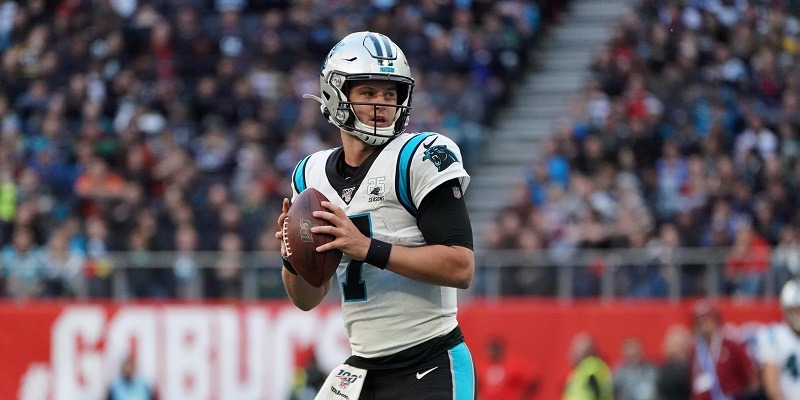 With Cam Newton still on the mend, Kyle Allen has another chance to stake his claim to the Carolina Panthers’ starting job at the San Francisco 49ers on Sunday.

Allen is 5-0 as the Panthers’ starter dating to 2018, but he’s about to face his toughest test against a talented and complex defense.

1. Saleh a master of disguise

While pass rush has been critical to the 49ers’ defensive rise, coordinator Robert Saleh deserves tremendous credit for evolving.

A product of Pete Carroll’s Seattle tree, Saleh brought the Seahawks-style Cover-3 to San Francisco in 2017, with limited effectiveness. He often featured changeups early in games but generally settled into Cover-3, predictability that was hard to overcome without top-end talent.

Saleh now has top-end talent, but he isn’t settling for one base coverage. After introducing more variation last season, he overhauled his scheme this year with a disguise-based approach stemming mostly from two-safety shells. Saleh now employs a variety of Cover-4, Cover-2 and Cover-6 (a combination of 4 and 2), usually with late rotations to maintain disguises until the snap.

These tactics — much like Vic Fangio’s in Chicago and Denver — muddy the quarterback’s reads and put more defenders’ eyes on him, creating takeaway opportunities (13 in six games, T-4th in NFL). Saleh has also brought selective zone blitzes with great effectiveness, another problem for offenses.

Allen has run Norv Turner’s scheme very well and avoided dangerous throws, but he hasn’t faced many shape-shifting defenses yet. Saleh will test Allen’s eyes and discipline, requiring him to confirm the coverage post-snap before making a decision.

Likewise, Allen must protect the ball against a ferocious pass rush. In 10 sacks taken, he has six fumbles.

The New England Patriots have been making quarterbacks see ghosts all season. Sam Darnold just happened to be heard admitting it.

The Patriots were especially aggressive against the Jets, bringing several Cover-0 blitz variations, often without hiding them presnap. It wasn’t always all-out pressure, however. One of Bill Belichick’s favorite tactics is playing Cover-0 (no deep safety, everyone alone in man coverage) and sending all potential rushers, only to have interior rushers drop out once contacted by a blocker. This essentially guarantees a free rusher while also taking away inside throws.

Belichick might be less aggressive against the Cleveland Browns, given the danger of leaving Odell Beckham one-on-one, but Baker Mayfield will see at least a few Cover-0 looks. He and Freddie Kitchens must have better answers — both via protections and hot routes — than Darnold and Adam Gase had on Monday.

Even if those answers work, Mayfield is going to face some pressure. Belichick is too good at scheming free rushers, and the Browns’ O-line remains shaky. Mayfield must be disciplined in his distribution and avoid drifting in the pocket.

3. Two potential Titans stars you may have forgotten

The 3-4 Tennessee Titans aren’t in great shape, but they’re far from sunk. Ryan Tannehill has stabilized the offense, while an already stacked defense just added another stud up front.

Tannehill’s willingness to stay with reads amid pressure and turn throws loose into tight windows is huge for Corey Davis, who some might have already labeled a bust. The 2017 fifth overall pick quietly made major progress last year, but Mariota didn’t find him enough to let him show it.

In Tannehill’s first start Sunday, Davis made six grabs (on seven targets) for 80 yards and a touchdown, including five tight-window, contested catches. He uses his frame to attack and shield the ball, and he can survive contact at the catch point, bouncing off would-be tacklers at times for chunks of extra yards. With more chances from Tannehill, Davis could become a bonafide No. 1 wideout.

Ryan Tannehill’s biggest advantage over Marcus Mariota is his willingness to turn throws loose on time, even against pressure or tight coverage.

Even more promising Sunday was the debut of first-round rookie D-lineman Jeffery Simmons. Just eight months after ACL surgery, Simmons looked like the potential top-five pick he was before injury.

Simmons saw only 21 defensive snaps, aligning all over the line, and looked thicker than in college, as he’s likely not in game shape yet. But he was extremely disruptive and productive, collecting four tackles (two for loss) and one sack while dominating near the goal line on the Chargers’ failed final drive.

As he gets in game shape, could get leaner, even more explosive. Scary pic.twitter.com/zMpisDwAXI

The sack was aided by DaQuan Jones on a stunt, and Philip Rivers stepped right into Simmons. But Simmons pressured Rivers three other times, despite not playing in obvious passing situations. He’s going to earn more pass-down snaps soon — he’s too dangerous not to — and he could get leaner and even more explosive.

With tough games looming at Carolina and vs. Kansas City before the Week 11 bye, Tennessee likely must beat Tampa Bay.

Whether it’s Patrick Mahomes or Matt Moore on Sunday night for the Kansas City Chiefs, the starting QB must be highly aware of the Green Bay Packers’ pair of Smiths.

Preston Smith and Za’Darius Smith (unrelated) didn’t reach Derek Carr last week thanks to Oakland’s conservative game plan, but they’ve been a terror since arriving via free agency in March.

Preston is longer and more of an edge bender, while Za’Darius is more physical and versatile, often lining up inside. The pair becomes most dangerous when aligned to the same side, with Preston outside and Za’Darius over the guard. That often prefaces a stunt, with Preston looping inside the upfield rush of Za’Darius and wreaking havoc.

But they’ve also played off that tendency with a wicked counter. Twice this season, Preston has collected sacks essentially unblocked because he faked a stunt, getting the offensive tackle to turn inside to take Za’Darius, only for Preston to fly off the edge free. It appears Preston is ad-libbing — rather than the Packers calling a rare “coffeehouse stunt” (where two players fake inward, then go out) — but either way, it’s a chore for an O-line to handle.

When #GoPackGo Za’Darius Smith (inside) and Preston Smith (edge) align on the same side, beware 🎃

The Chiefs remain sturdy at right tackle with Mitchell Schwartz, but left tackle Eric Fisher and left guard Andrew Wiley have missed time. Even if both play, expect Green Bay to align both Smiths to the offense’s left on passing downs.

After Chase Edmonds (27 carries, 126 yards, three TDs) thrived in place of David Johnson last week, the Cardinals rank 11th in yards per carry (4.85). The scheme has featured a ton of variety, leveraging Kyler Murray’s legs at times but also building core runs off one another, a credit to both Kingsbury and offensive line coach Sean Kugler.

The sledding will be tough on Sunday, however, against the New Orleans Saints’ dominant defense. Since Sheldon Rankins returned in Week 4, the Saints have allowed just 3.2 yards per carry and just three carries of 10-plus yards (one on a WR reverse).

Of course, the Saints’ pass defense is also terrifying, allowing 5.3 yards per attempt with 11 sacks and two interceptions over the same span. Kingsbury and Murray could be in for a long day.