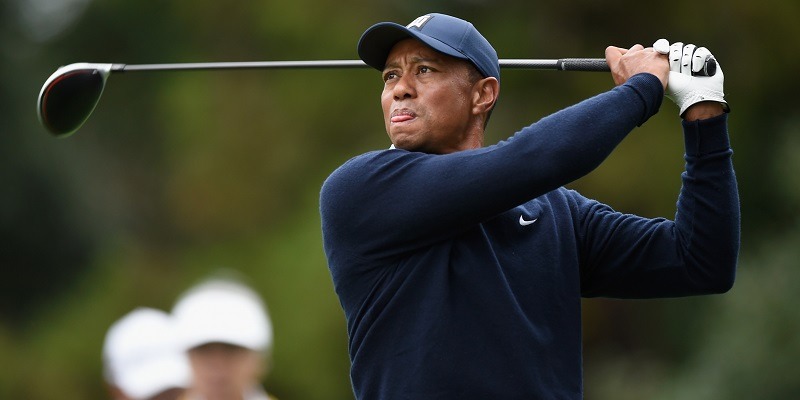 Woods led by three shots at 18-under-par after playing 29 holes on Sunday in the weather-delayed event. He finished at 19-under 261 after playing seven holes on the restart.

“This is big,” Woods told the Golf Channel. “Physically, I can’t do any of the things I used to do. That is just the way it is. But I can certainly think my way around a golf course. I don’t hit the ball anywhere near as far compared to the field — 300 yards used to be a good thing; now it’s chump change.

“But I can still manage my way around a golf course. I know how to play, and I was able to do that this week.”

Woods bogeyed the par-4th 12th when he returned to the course Monday but got the stroke back with a birdie at the par-5 14th. He missed a chance to expand his three-shot lead over Hideki Matsuyama when he slid a short birdie putt on the 15th to the left of the hole, while Matsuyama, playing in his home country, moments later inched closer at 16 under with a birdie at 16.

Woods has 82 titles in 359 PGA Tour starts — 66 fewer than what Snead needed to set the record.

Northern Irishman Rory McIlroy (3-under 67 on Sunday) and South Korea’s Sungjae Im (65) tied for third at 13 under. Gary Woodland was alone in fifth at 12 under.

“It’s unbelievable,” said Woodland, who played with Woods in the last two rounds. “It was a ball-striking exhibition. Everything was just good. He drove the ball beautifully. His distance control is a joke; I’ve never seen anything like it. And then he makes some putts. It was impressive.”

Woods won his fifth Masters and 15th major in April but missed the cut in two other majors — the PGA Championship and Open Championship — and underwent surgery to repair minor cartilage damage in his left knee in late August. He finished 42nd in the FedEx Cup standings.

Woods, who hadn’t played since the BMW Championship in August, said victories are sweeter at this point in his career.

“No doubt,” he said. “There was a point where I didn’t know if I would ever play again, and I was just hoping to be able to walk normal again.

“To be able to go through all that and to get to where I’m at now, I’m very appreciative. I know how it feels to be where I felt this game was taken away from me, where I couldn’t participate in it the way I wanted to. I’m so happy and fortunate to have this opportunity again.”

Woods’ first PGA Tour title came at the 1996 Las Vegas Invitational, and he earned his 79th triumph at the World Golf Championship-Bridgestone Invitational in early August 2013. But he was stuck on that number while he battled health issues for the next five years, undergoing a spinal fusion procedure amid four back surgeries.

“I can’t believe it’s been 23 years since my first Tour win,” he said at the trophy presentation. “Tying the great Sam Snead on our all-time winning list is a record that I certainly didn’t think was possible when I first started my career.”

Woods showed signs of better health in 2018 before he put it all together at the season-ending TOUR Championship at East Lake in Atlanta to end his five-year drought. His 81st victory came at the Masters.

Woods is not scheduled to play in any more PGA Tour events in 2019, likely to return for his usual opener on the calendar — the Farmers Insurance Open in late January at Torrey Pines in La Jolla, Calif.

He will captain the United States’ Presidents Cup team in Australia from Dec. 13-15, and he hadn’t ruled out using a captain’s pick on himself — and that was before his victory in Japan.

“I think the player definitely got the captain’s attention,” he said of selecting himself to the team.

Woods has won PGA Tour events in seven countries and, per Elias Sports, has twice as many wire-to-wire wins (14) than any golfer in PGA Tour history. Woods shared the first-round lead this week after opening with three consecutive bogeys.

Nearly 10 inches of rain wiped out Friday’s second round, forcing tournament organizers to play as many holes Sunday as possible to catch up.