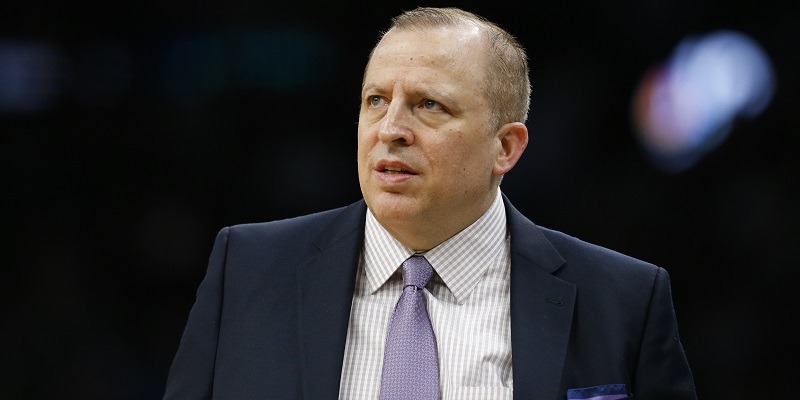 The Minnesota Timberwolves fired head coach and president of basketball operations Tom Thibodeau on Sunday evening, hours after the team beat the Los Angeles Lakers 108-86.
“We would like to thank Tom for his efforts and wish him all the best,” owner Glen Taylor said in a statement. “These decisions are never easy to make, but we felt them necessary to move our organization forward.”
Assistant coach Ryan Saunders will serve as interim head coach, and general manager Scott Layden will run the basketball department’s day-to-day operations for the rest of the season. Assistant Andy Greer, who has spent eight years under Thibodeau, was also fired.
ESPN reports Taylor is seriously considering Fred Hoiberg — who worked in Minnesota’s front office before becoming Iowa State’s head coach in 2010 — as either the head coach or GM in the future. The Athletic reports Hoiberg is not in the team’s immediate plans, but that could change over time.
Thibodeau, 60, joined the team in 2016 and went 96-107 in two-plus seasons, including 18-21 this season. Last season, he helped the Wolves to a 47-35 record and their first playoff appearance in 14 years, but the team struggled to open this year amid Jimmy Butler’s trade demand.
Following a 4-9 start, Minnesota won 10 of its first 13 games after Butler was traded on Nov. 11 to get back above .500. But the team has gone 6-9 since then, including a stretch of nine losses in 13 games.
Thibodeau is 351-246 in eight career seasons as an NBA head coach, after leading the Chicago Bulls from 2010 through 2015. He won Coach of the Year honors in his first season in Chicago after leading the Bulls to a 62-20 record.
Saunders, 32, is the son of the late Flip Saunders, who coached the Timberwolves from 1995-2005 and rejoined the organization as president of basketball operations in 2013. Ryan Saunders has been an assistant in Minnesota since 2014, after spending five years as an assistant on the Washington Wizards’ staff.
Hoiberg, 46, replaced Thibodeau in Chicago in 2015 and went 115-155 with the Bulls before being fired after a 5-19 start to this season.