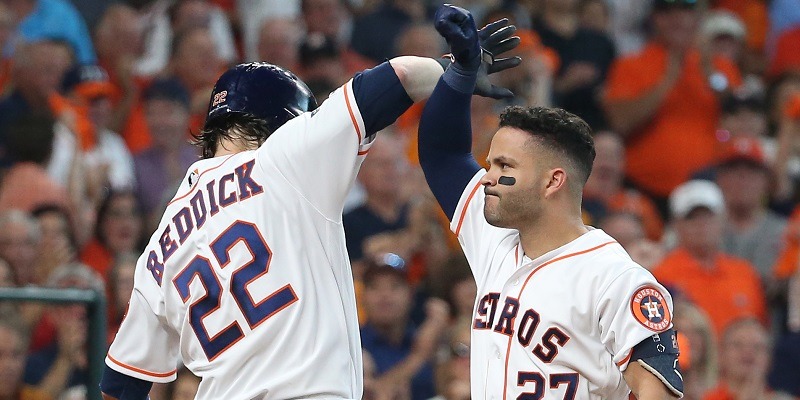 HOUSTON — Jose Altuve slugged his ninth career postseason home run while Justin Verlander allowed one hit over seven scoreless innings as the Astros recorded a 6-2 win over the Tampa Bay Rays in the opener of the American League Division Series on Friday.

Altuve snapped a scoreless tie and keyed a four-run fifth inning with his two-run shot to left field off Rays right-hander Tyler Glasnow (0-1).

Glasnow appeared to have steadied himself with a three-pitch strikeout of George Springer after issuing a four-pitch leadoff walk to Josh Reddick. Instead, Altuve yanked a 97.5 mile-per-hour fastball into the Crawford Boxes for a 2-0 lead.

Altuve has homered in three consecutive Game 1s of the ALDS for the Astros, who will take a series lead into Game 2 at Minute Maid Park on Saturday.

Verlander (1-0) posted his majors-record eighth victory in as many decisions in the Division Series. He lowered his ERA to 2.14 in 12 games (11 starts) in the ALDS by recording eight strikeouts against three walks.

Brandon Lowe recorded the lone hit against Verlander after leading off the fifth inning with a single to right.

Despite facing the minimum through three innings, Verlander didn’t find his groove until the latter stages of his outing.

Verlander induced a 5-4-3 double play off the bat of Tommy Pham to erase his leadoff walk to Austin Meadows in the first inning and got Pham to roll into another double play that erased Meadows and capped the sixth.

Verlander closed his start by striking out the side in the seventh. He fanned six of the final eight batters he faced.

Glasnow posted three consecutive scoreless appearances to close the season and stranded five total baserunners in the second and third. But the Altuve blast capped his afternoon and the Astros added two insurance runs when Lowe failed to catch a Yuli Gurriel popup to shallow right with two outs in the fifth. Yordan Alvarez and Gurriel delivered RBI doubles in the seventh.