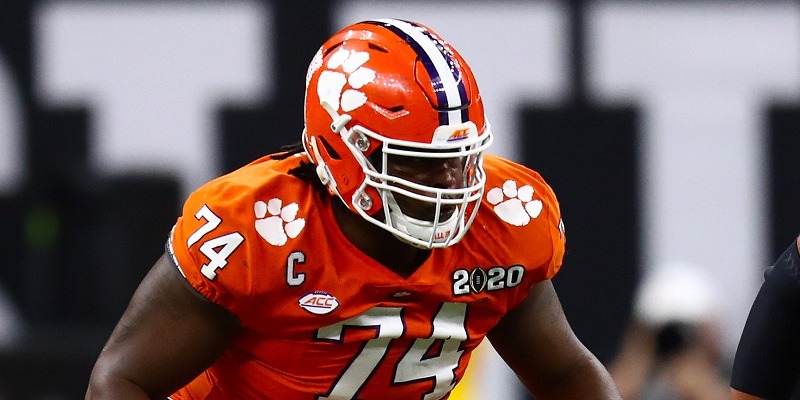 A self-made star, Simpson earned All-American honors as a second team (AP) selection in 2019. He’s already a success story in that he graduated from Clemson after being raised by a single mother and is determined to break a family cycle of incarceration. He started 29 of 50 career games for the Tigers.

After a rough start at the Senior Bowl, Simpson settled in later in the week. He also showed off his strength at the NFL Scouting Combine with 34 bench-press reps, ranking third among all O-linemen.

Simpson is a classic earth-moving power blocker. Thick build with tree trunks for limbs. Flashes impressive initial quickness considering his mass and bulk. Can wow as a mover, pulling to reach the second level and pancaking panicked linebackers and defensive backs. Raw power to generate movement at the point of attack, using his leg drive to knock defenders yards downfield. Effectively mirrors in pass protection, winning with his width, balance and strength. Former high school state (South Carolina) wrestling champion with an understanding of leverage and comfort in close quarters. Former four-star recruit who played immediately at Clemson. Gets high marks for intangibles.

While a good athlete for his size, Simpson is just average in comparison to other NFL prospects at his position. Inconsistent with his initial get-off speed. Can be late off the ball, providing opponents with an early advantage. Lacks quickness for effective cut blocks and is more of an intimidating presence defenders can avoid or run around at the second level. Is not consistently the snatch-and-sustain type.

D.J. Fluker, Seattle Seahawks — Simpson isn’t going to wow anyone with his raw athleticism, but he’s very effective as a drive blocker. If protected by an athletic tackle and center, he can be a bulldozer who keeps the chains moving.