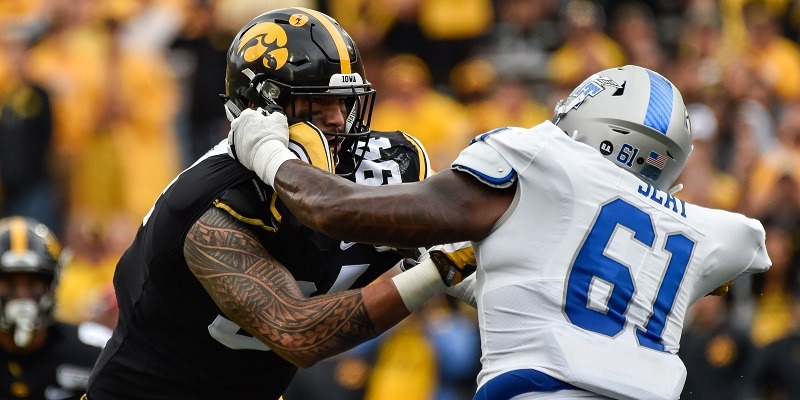 On a deep Iowa defense, Epenesa saw few opportunities early in his career, but he has delivered with production since Day 1. As a true freshman, 5.5 of his 15 tackles went for loss, including 4.5 sacks. He more than doubled that production in 2018 despite still not being a full-time starter, finishing with 37 tackles (16.5 for loss), 10.5 sacks, four batted passes and four forced fumbles. Finally a full-time starter in 2019, he racked up 49 tackles (14.5 for loss), 11.5 sacks, three batted passes and four forced fumbles.

Not known for his athleticism, Epenesa’s NFL Scouting Combine workout was well below average. He ran the slowest 40-yard dash (5.04 seconds) of any sub-300 pound D-lineman and tied for last at the position in the bench press (17 reps).

Epenesa has outstanding size, as he’s tall, long and thickly built. But he also has quality athleticism and fluidity, enough to threaten the corner of offensive tackles. That said, strength is the core of his game. He can rag-doll offensive linemen both in the run game and pass rush, using long arms, heavy hands and strong grip to deliver blows and control his counterpart. His technical skills are advanced, as he shows a variety of hand swipes and counters and knows how to discard blocks. He sets up moves well, using stutters before going speed-to-power and incorporating chop moves to shorten the corner when he goes outside. Epenesa’s game fits on all three downs, and he might bring versatility as a 4-3 end, a 3-4 end or an interior rusher in subpackages.

Epenesa’s speed, athleticism and bend are far from elite, lowering his ceiling somewhat. He’s not always able to win outside of offensive tackles, whether because he isn’t quick enough off the ball or can’t bend enough to turn the corner. His frame provides a big target for offensive tackles to punch, and he too often ends up pushed past the quarterback, or stymied without a second option. He might have to make his living primarily winning inside or going through blockers. Teams that run 3-4 defenses will have to be comfortable with him playing inside, as he’s not laterally mobile enough to be an outside linebacker.

Cameron Jordan, New Orleans Saints — Coming out of Cal, Jordan was a very good defensive end who lacked elite traits and relied primarily on power. Some wondered if he’d be best as a 3-4 defensive end or even become a full-time 3-technique. But he settled in at left end in the Saints’ 4-3 and steadily grew into a superstar thanks to technical prowess, power and underrated quickness. Epenesa should be a quality player wherever he lands, but Jordan’s path is a plausible one he could follow to stardom.