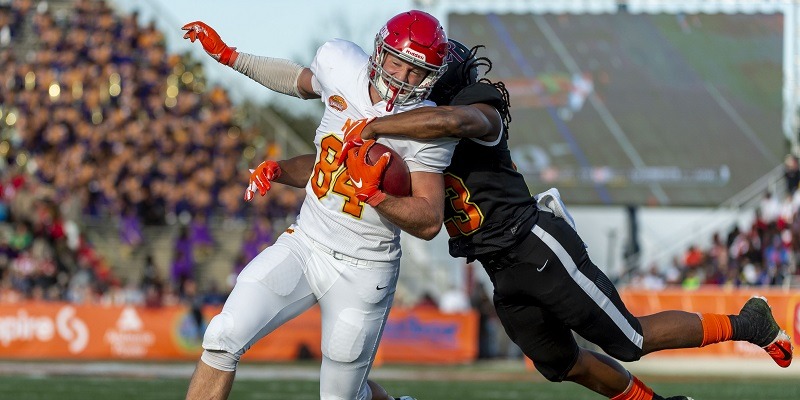 A touchdown machine at Dayton, Trautman dominated the FCS level with 14 scoring receptions as a senior and 31 in 44 college games. He walked-on as a quarterback at Dayton in 2015 but switched to tight end early on and capped his career with 70 receptions for 916 yards as a senior before elevating his stock at the Senior Bowl.

Trautman continued to impress at the NFL Scouting Combine, despite running a disappointing 40-yard dash (4.80). His 3-cone time (6.78) was easily best among tight ends, and he drew raves for his on-field workout.

Trautman is a good athlete who can get around the field with surprising ease. Looks the part of a hybrid tight end who can find success as a receiver and a blocker. Flashes smart angles in the run game but needs to maintain them throughout plays. Looked great as a pass-catcher during his time at the Senior Bowl. Hands have some phenomenal flashes, although the timing and technique will need touched up. Strong enough to fight off hands along his route path. Not a precise route-runner, but has the burst to find separation. Big enough to be a capable blocker.

Trautman fails to utilize his lower half properly on most blocks. Average play strength won’t wow any defenders. Technical aspects of the game aren’t implemented yet. Inaccurate blocker who gives up leverage and misses with his hand placement. Fails to box out defenders and take over airspace when the ball is coming in. Not nearly as tough of a runner as expected. Modest abilities after the catch.

David Njoku, Cleveland Browns — A do-it-all tight end with a well-rounded game, Trautman looks like a potential top 100 pick. He’s not as athletically inclined as Njoku but shares similar raw potential and style. Trautman is an easy prospect to bet on.