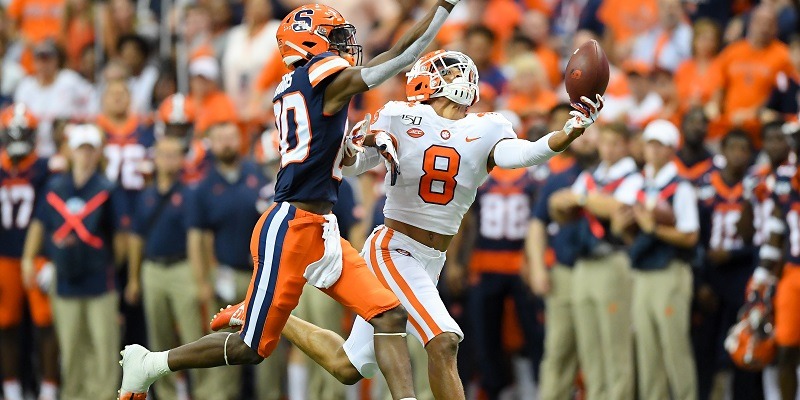 A five-star recruit out of Georgia, Terrell earned immediate playing time (six PBUs, INT as a true freshman) before ascending into a starting role in 2018. He led the Tigers with three interceptions, including a pick-six of Tua Tagovailoa in the national title game win over Alabama. Far from “just” a cover corner, Terrell registered 53 tackles in 2018, earning third-team All-ACC honors before jumping to first-team All-ACC accolades as a junior. With opponents largely avoiding him, Terrell’s numbers dropped slightly (39 tackles, seven PBUs, two INTs).

Terrell tied for the fifth-best among cornerbacks at the NFL Scouting Combine in both the 40-yard dash (4.42 seconds) and the broad jump (129 inches), a very impressive workout given his size (6-1, 195).

Terrell is built and moves like a point guard. Long, gangly frame with eye-popping natural athleticism. At his best faced up in press-man coverage but isn’t reliant upon jamming receivers at the line of scrimmage, smoothly turning and exploding out of his stance to run hip to hip with them. Possesses the straight-line speed to cover receivers deep and shows good route-awareness, reading the receiver and anticipating his cuts, remaining between the pass-catcher and quarterback to throttle passing windows. Gets his head around when the ball is in the air. Physical in run support, taking the fight to receivers (and even linemen) to defeat blocks, showing strong, active hands to rip himself free.

Like most long-legged corners, Terrell can be a bit sticky coming out of his breaks, allowing slivers of room for accurate quarterbacks to target. A bit robotic in zone coverage and isn’t as quick to close downhill on underneath routes. Can improve his jam technique, as he often gets himself off-balance. Surrenders inside releases too easily, trusting make-up speed and length to slap away quick slants. Could time his leaps better, losing out on jump-balls, on occasion, when he appears to be in good position to defend the pass. Was exploited by LSU’s Ja’Marr Chase repeatedly in the national title game loss.

Xavier Rhodes, Minnesota Vikings — Terrell is much slimmer than the 29-year old Rhodes, although the youngster does have the frame to add weight without losing significant quickness. But both have length and physicality, and Terrell looks like a future longtime starter in the NFL, just as Rhodes became after being selected 25th overall out of Florida State in 2013.