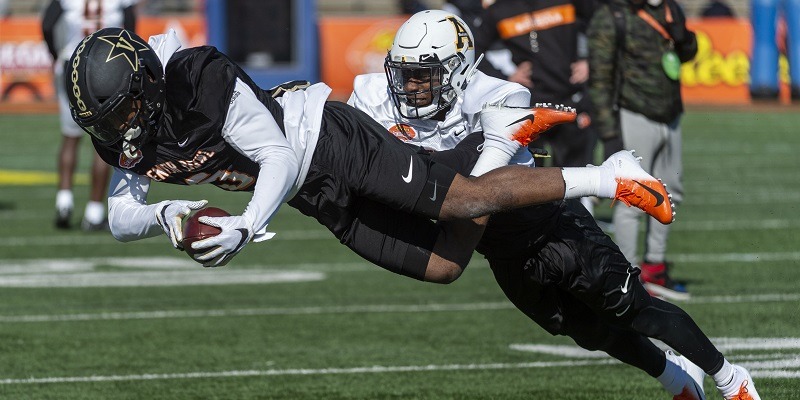 The 2019 Sun Belt Defensive Player of the Year, Davis-Gaither played in 55 career games and totaled 258 tackles (28 for loss), 8.0 sacks, 18 passes defended (one interception and 17 PBUs), two forced fumbles and one blocked field goal (to end a 34-31 win at North Carolina).

Davis-Gaither impressed throughout the week at the Senior Bowl, particularly with his speed in coverage. He sat out the NFL Scouting Combine due to a stress fracture in his foot that required surgery.

Davis-Gaither moves like a stray cat fighting animal control. Twitched-up, agile athlete. Blunt-force tackler who launches himself around the field with reckless abandon. Motor is borderline inhuman. Never quits on plays regardless of the odds. Makes constant hustle plays and returns to the frame from the far side of the field to get in on the action. Soul of the team and defense. Very light on his feet. Comfortable operating in coverage. Pesters tight ends and running backs enough to disrupt their routes. Pass-rushing ability is underrated — 23 QB pressures in 2019. Flashes the hand speed and bend to threaten offensive tackles if he can avoid a clean punch. As confident as it gets. Fairly fast with his processing but didn’t face the most complex schemes.

With a tweener body type, Davis-Gaither may have trouble translating against bigger and faster competition. Was a big fish in a small pond, but App State posted a 5-0 record in bowl games during Davis-Gaither’s career and took on solid FBS competition. Built more like a big defensive back than an outside linebacker. Bounces off of too many tackle attempts due to poor form and reckless pursuit. Swallowed up by blockers and struggles to disengage. Physicality is a question for some teams based on competition.

Dorian O’Daniel, Kansas City Chiefs — The pint-sized Davis-Gaither’s energetic style is an instant callback to former Clemson linebacker Dorian O’Daniel. O’Daniel spent more time in coverage, but the two are eerily similar playing near the line of scrimmage, as feisty riot-starters who don’t buy their underdog label. Davis-Gaither is sure to be at least a special teams ace and could become an incredible NFL playmaker with some discipline and the right scheme fit.