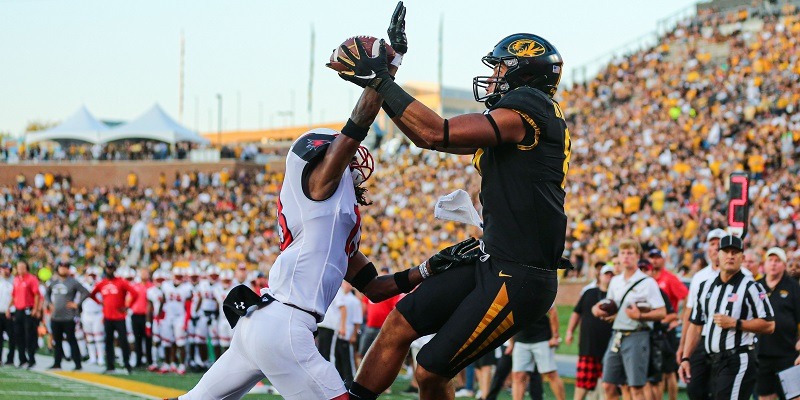 Okwuegbunam (pronounced OH-koo-WAY-boo-NAM) was one of the three finalists for the 2018 Mackey Award, given to the nation’s top tight end. His production dropped in 2019 (as did the entire Missouri passing attack), but Okwuegbunam did finish with 23 career touchdowns on 98 catches in three seasons.

He splashed at the NFL Scouting Combine with a blazing 40-yard dash (4.49), outpacing the rest of the tight ends by nearly two-tenths of a second, though he did not do other testing drills.

Okwuegbunam was seemingly born to play tight end in the NFL. Has an ideal frame, including terrific height, broad shoulders, long arms and an athletic musculature. Glides off the line and into his route, showing excellent acceleration for a tight end of his size, including great speed to challenge the seam. Big, soft mitts with good strength in his fingers to snatch hot passes, along with good timing on his leaps and impressive body control. A monster in the red zone whether as a traditional inline blocker, on the wing, in motion or split out wide and targeted on fades. Showed improved recognition, hand placement and strength as a blocker when Mizzou shifted to more of a running attack in 2019.

A big man who plays smaller than he should, Okwuegbunam lacks the aggressive, physical nature that his size suggests, both as a blocker and after the catch. Routes lack precision, often satisfied with simply rounding off breaks rather than sinking his hips and firing out of his cuts to generate real separation. Galloping strides eat up yardage if he catches the ball in motion, but does not show the instant acceleration to be a real YAC threat when he gets it flat-footed. Missed time on the field and during offseason workouts the past two years with knee and shoulder injuries. Production dipped in 2019. Not nearly consistent enough to trust as a blocker.

Jimmy Graham, Green Bay Packers — Finding the match for Okwuegbunam is relatively easy with Graham, who offers a similarly tantalizing package of size and speed as a pass-catcher. Like Graham, Okwuegbunam plays with more of a finesse style than his size would indicate, but he’s a legitimate matchup problem who could explode in the right scheme.